Today we talk about Lake Merced, as well as the recent video we made featuring it.

Lake Merced is located in the southwestern corner of San Francisco, in the vicinity of the SF Zoo and SF State University. 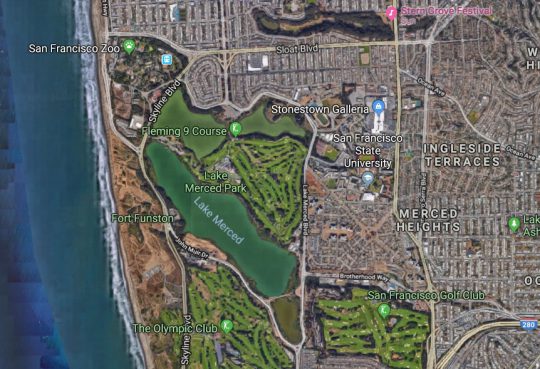 Despite its odd shape and the fact that it borders three golf courses, it is actually a natural lake.  It is fed primarily by an underground spring.  In the 19th century, the lake briefly had an outlet to the ocean, approximately where the Great Highway breaks off from Skyline Boulevard, just south of the zoo.  The outlet is long gone, but the lake’s ecosystem retains some of its saltwater heritage among the fish and other wildlife that inhabit it. Lake Merced and its surrounding park remain one of the last and largest natural spaces left in the city (in spite of the golf courses), and is home to a variety of plant and animal life.  On the day I visited to shoot video, I encountered this egret. 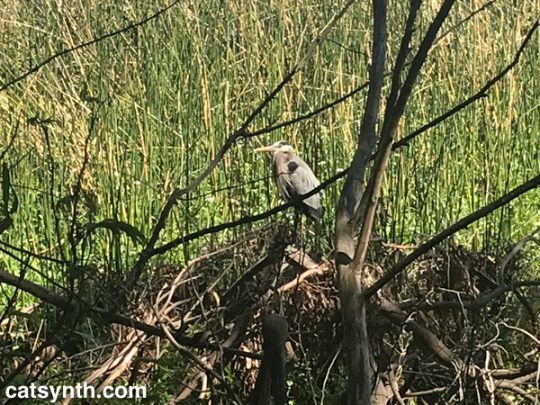 But it is definitely an urban natural space, with sounds and sights from the surrounding city mixing with nature.  I am particularly fond of this view looking east over the lake to some apartment buildings.  It brings to mind Flushing Meadows in the New York City borough of Queens. 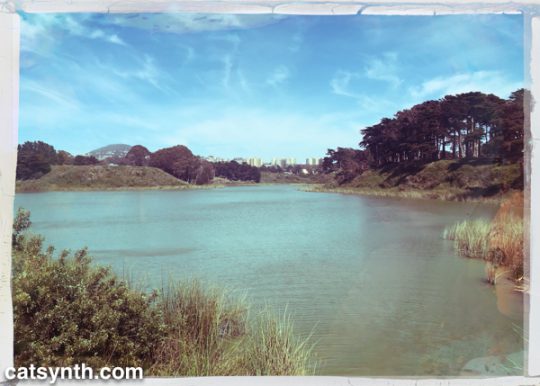 I have been spending more time in the western neighborhoods of San Francisco of late, and Lake Merced is one of the spots I revisit.  This is what inspired me to make it the subject of a CatSynth TV video, complete with original synthesizer music. 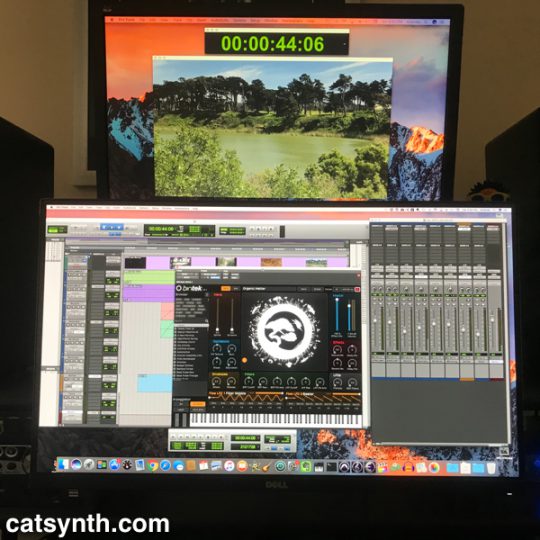 Here is see the final post-production on the video in Pro Tools.  Front and center is Tracktion’s BioTek software synthesizer, which I reviewed during NAMM 2016.  It was among the primary instruments used in this video where I blended its mix of natural and traditional-synthesizer sounds with the sounds of the field video. 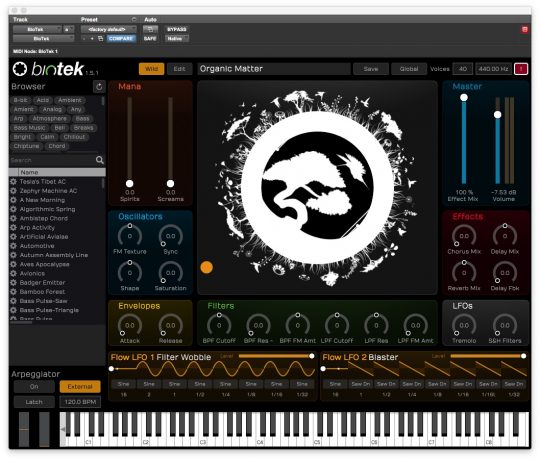 I also made extensive use of the 4ms Spectral Multiband Resonator and Epoch Modular Benjolin (designed by Rob Hordjik).  They both have very elemental sounds that resemble air and water.  The Benjolin is chaotic by design, and a small turn of a knob can change it from liquidy to screeching, so it’s sometimes a challenge to get a good recording that fits the concept of the music.  The SMR is a lot of fun to play, especially using alternate tunings and changing the spread and morph parameters.  A clock is used to constantly shift the bands. 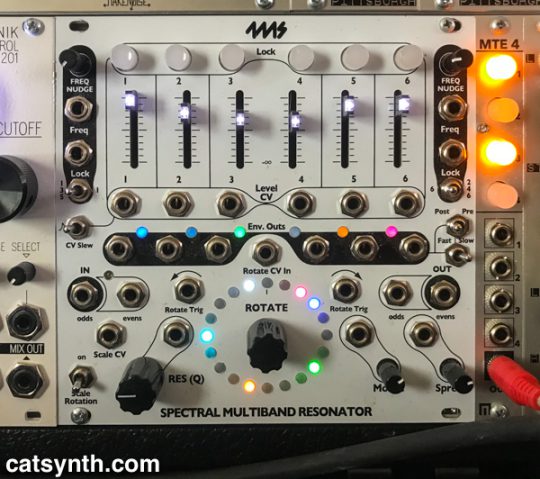 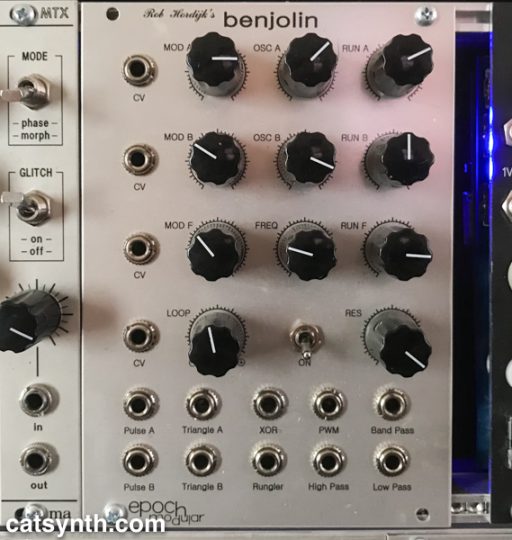 Rounding out the sound palette were the Arturia MiniBrute 2, Mimimoog Model D, and Metasonix R53 vacuum-tube waveshaper and ring modulator. 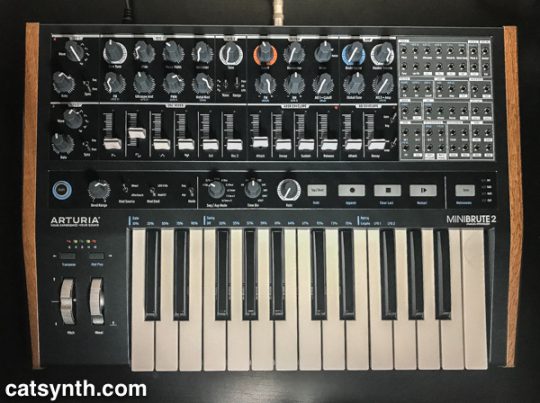 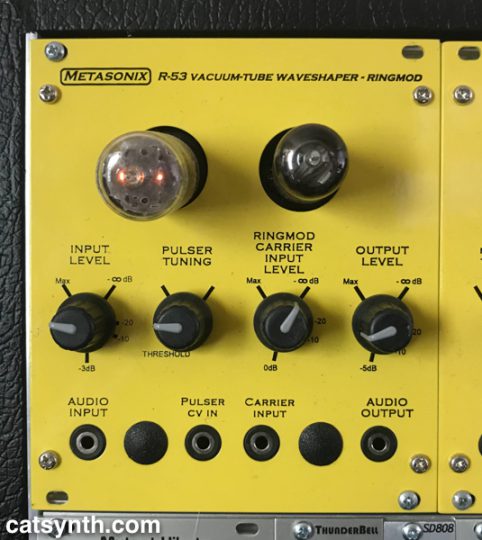 The Moog Model D, the MiniBrute and several of the modules make cameos during the video, as does Sam Sam.  Watch the video all the way through to spot her 😺

This was a fun video to shoot and put together, something a bit more creative and abstract than our usual demos or live-show reports.  I have more of these waiting in the queue to be made… 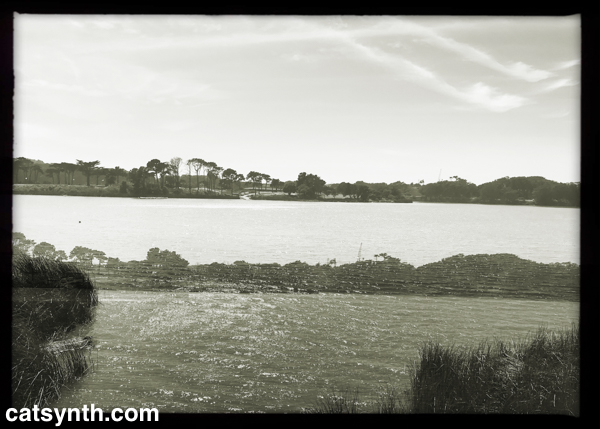 Lake Merced in the southwest corner of San Francisco.  Hipstamatic photo with a multi-exposure lens.