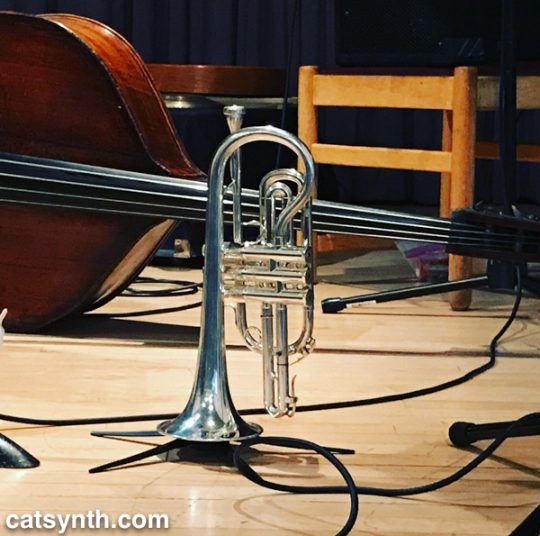 For the final night of the Outsound New Music Summit, we invited two jazz legends to collaborate with noted local musicians. Each of them has performed and recorded with a whos-who of jazz in the late 20th and early 21st centuries.  Sometimes such collaborations can go awry in practice, but we at CatSynth are happy to say that both were a resounding success.

Bobby Bradford has had a long career as cornet player and composer who enjoyed long collaborations with the likes of Ornette Coleman and John Carter.  He has taught multiple generations of musicians, including Bill Noertker, who invited Bradford to lead a project for this year’s summit.  The cornetist and bassist teamed up with cornetist Theo Padouvas and bassist Scott Walton to form Bobby Bradford’s Brass’n’Bass. 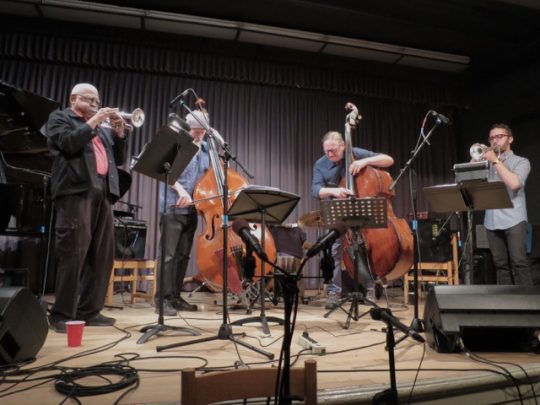 The performance focused on Bradford’s compositions, but as in any good jazz setting, each of the musicians brought their own creativity to the set.  The instrumentation makes for a sparse texture, with each member of the group having to perform multiple duties on melody, harmony, and rhythm.  But the result is an unusual sound.  Bradford’s cornet led the way, with Padouvas filling in some of the space with fast runs and other sounds.  Noertker and Walton took turns on the rhythm at times but also worked together as a unit.  They also doubled as additional melodic instruments in the group.  One memorable moment featured Noertker playing long bowed harmonics atop Walton’s back-and-forth plucked bass notes.  There was a ballad with Bradford and Padouvas playing nearly the same line what seemed like a different scale and harmony to the basses, resulting in a very haunting effect.  Another faster tune was reminiscent of Ornette Coleman in the 1960s (i.e., before the Prime Time era). 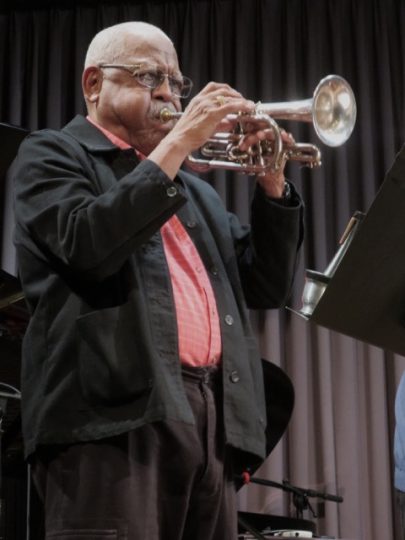 As Bradford is perhaps best known as a sideman and a teacher, it was great to see him lead the band with his own music on this occasion. The group did end with a more open improvisation, which Bradford himself admitted he wasn’t sure how it was going to turn out.  It was short and sweet, with the musicians bouncing off one another but not overstaying their moments.  Overall, I thought this group had a fine debut, and it will be interesting to see if they play together again, perhaps in Bradford’s home turf of Southern California. 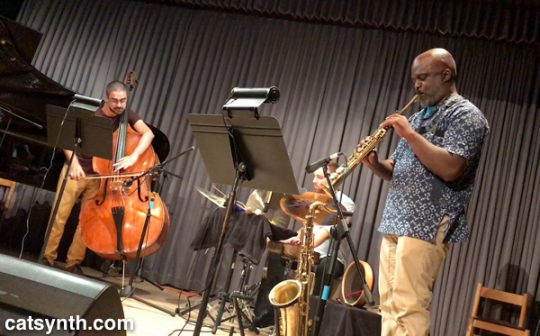 On the surface, this coming together would seem to be a more traditional jazz quartet, but Gennaro had an unusual percussion kit with a variety of hand drums, bells, and more.  Indeed, there were times it seemed all four musicians were playing melody lines.  And there was a lot of open space, with Robinson’s meditative poses acting as a fifth instrument. 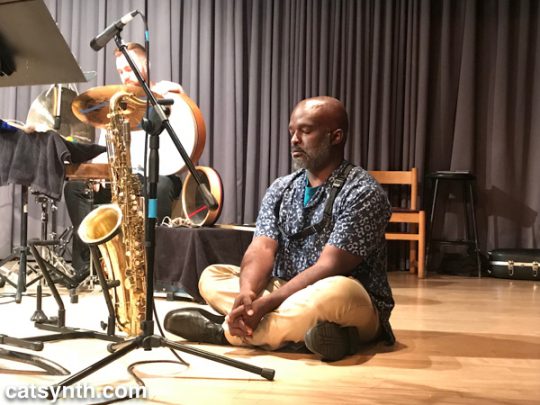 Robinson has a very sparse, detailed and contemplative style of playing, even when he was playing faster sections.  This contrasted with Crispell’s frenetic runs on the piano.  Hodel was able to match her with percussive notes on the bass.  I really liked the way the two of them interplayed.  I found myself re-focusing throughout on Crispell to see what she would do next.  There was something clever, even mischievous, about her playing, even when it was darker long chords. 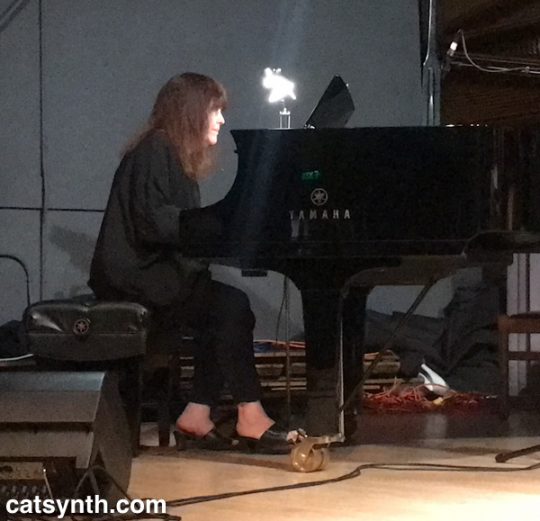 The ever-changing style and energy throughout the set make sense in the context of the work being premiered.  As stated in the program, “Through the Twisting Prisms is a collection of intervallic, rhythmic, harmonic labyrinths and mazes that explore ideas convergence, expansion, contraction, and meditation.”

Together, the two sets made a fine conclusion to this year’s Outsound Summit.  And we had a full house at the Community Music Center, even in the balcony.  We finish exhausted but satisfied at a job well done and a great week of music brought to life.

The concerts of the 2013 Outsound Music Summit opened with an evening of acoustic ensembles that combined improvisation and composition, each to quite different effect.
The evening opened with a performance by Opera Wolf, a trio featuring Crystal Pascucci on cello, Joshua Marshall on saxophone, and Robert Lopez on drums. They performed four pieces: one composed by each member of the group, and a free improvisation.

One structural quality that carried over all four pieces was the use of strongly punctuated phrasing. The initial opening sounds with harmonics and sparse arrhythmic hits was separate by a delineated silence before switching texture completely to growls and intricate cello runs, and then again into more melodious bowed phrases accompanied by the sounds of metal on a drum head. This punctuation continued into the second piece as well, which began quite noisily with scratching and unusual harmonics, but after a pause changed suddenly into jazzy runs followed by vocal effects and whistle tones. Other interesting sonic moments included Marshall cooing and purring with his saxophone against long bowed towns on the cello by Pascucci, and an extended run by all three members with scraping, tapping and clicking sounds.

Next up was KREation, an ensemble led by Kevin Robinson. KREation features a varying lineup, and this evening was somewhat different from the previous time I had encountered them. Along with Robinson, there was Christin Hablewitz, John Schwerbel and Tony Gennaro.

Their performance was a single continuous flow of music, starting with a modal and quite serene recorder duet of Robinson and Hablewitz. This gave way to percussion and prepared piano, and then to more fast runs on sax and piano accompanied by loud key clicks on the bass clarinet. The more melodious feel gave way to darker and more tense textures, but then got quite jazzy and rhythmic, especially when John Schwerbel switched over to a Rhodes Stage 73 electric piano (yes, it is one of my favorite instruments).

The textures and energy levels came in and out over the course of the performance like waves. There were some intricate counterpoints, including between recorder and saxophone, some pretty piano runs, and sections that moved between slower dramatic tones and bursts of fast motion.

The final performance of the evening featured Wiener Kids, a trio of Jordon Glenn, Aram Shelton and Cory Wright. Ostensibly, the group is a drummer with two masters of reed instruments, but on this occasion all three members also employed a wide selection of percussion.

This was a bit different from the previous Wiener Kids performances I have heard, which usually took place at clubs along side avant-rock bands. A couple of the pieces did employ the same sparse but rhythmically complex and driving sound I recalled, but there was also more detail and variety. The performance started with a somewhat humorous ensemble sound, like an odd-meter march. But it soon morphed into a solid four-beat funky rhythm with Wright on baritone saxophone acting as the all-important bass. The group came back to this funk idiom throughout their performance, and I thought it was their strongest element. They also employed complex polyrhythms and extended techniques as well as long melodic runs – one piece in particular featured a virtuosic saxophone solo by Wright.

The set ended with back-to-back songs starting with a more jazz rhythmic sound combining sax and drums, then moving into a second piece that was more percussion oriented, with polyrhythms and a focus on metallic percussion that gave the music a gamelan-like quality. Then it was back to the driving funkier 4/4 sound up to the finish.

In all, it was a strong start to this year’s Summit concerts, with dynamic performances. And it is quite a contrast to what comes next.