Today we look back at this year’s μHausen, a “micro-festival” of experimental electronics that takes place every summer deep at a secure undisclosed location in the Santa Cruz Mountains.  It was the subject of our most recent CatSynth TV episode.

As suggested in the video, I was thinking a lot about our natural surroundings as we made music with our thoroughly artificial electronic instruments.  The trees, the air, the light, all seemed to be of a piece with the music at times.  I also thought about the fact that I had not been able to attend the last three installments.  In 2015 and 2016 I had to cancel or decline because of medical issues, and I’m not sure what happened in 2017.  But I was back now and was great to see and hear everyone.

First up was Peter Elsea, recently retired from his longtime position as a professor of electronic music at UC Santa Cruz.  On this occasion, he performed with a small rig that included a modular synthesizer and an electronic wind instrument. 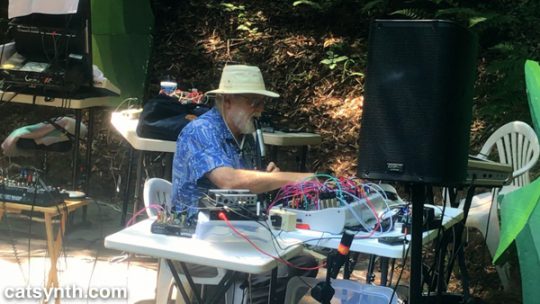 His set featured tones that were timbrally rich and often noisy, but still pitched.  This worked well with the wind controller which allowed the noisy tones to swell and fade musically.  But there were also some beautiful moments of quiet pure tones that evoked the natural surroundings.

Next up was Later Days, a project featuring Wayne Jackson with his iOS-based evolutionary synth  MendelTone, which allows patches to “breed” and evolve. 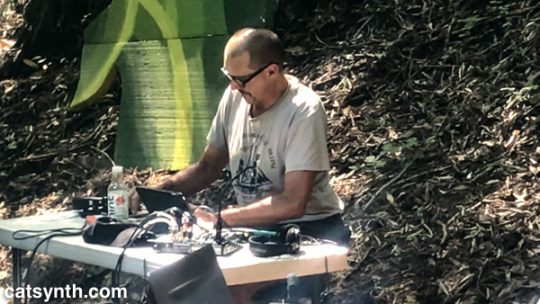 There was an urgent “machine-like” quality to the music, with low drones oms mixing with high swirls of sound and various percussive hits.  Wayne is also the founder of this event and often its leader, but this year he ceded organizing duties to R Duck (of the R Duck Show), who performed next. 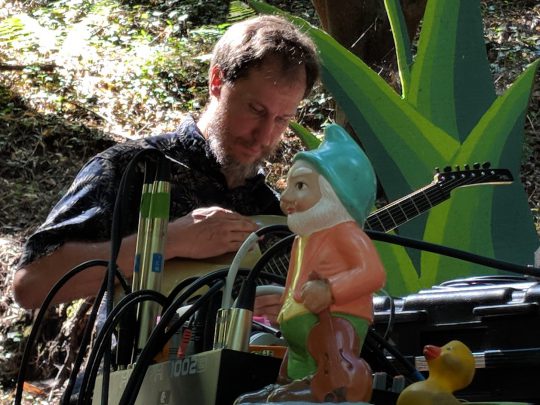 The first segment of his set featured beautiful drones of processed guitar. There were quick runs, but they were absorbed into the overall sound.  Over time, the tone and structure darkened, with more complex timbres and harmonies set against slow but anxious guitar riffs.  He also teamed up with Later Days to deliver his perennial incantation featuring chocolate.  (Did I mention that we at CatSynth love chocolate?)

Next up was synthesizer virtuoso Doug Lynner, who performed on a Eurorack-based Serge modular synthesizer. 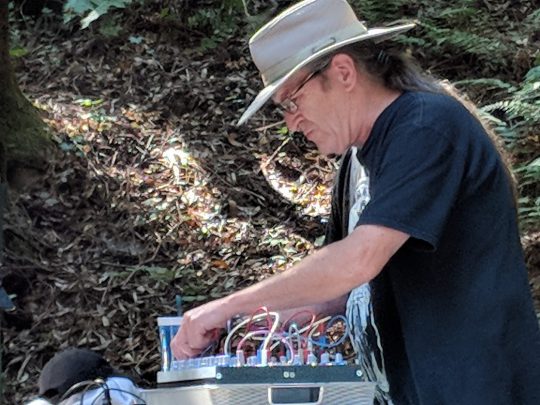 I have long come to expect very complex and intricate sounds from Doug, often set in a very sparse texture where one can clearly hear the details.  That was certainly the case in this performance, which opened with light sounds reminiscent of birds and whale songs.  It could have come from the surrounding woods rather than the synthesizer on stage (OK, the bird sounds could have, probably not the whale sounds).  After a period of rapid modulation, the music settled into a different pattern, with a contrapuntal texture of long ascending tones reminiscent of sirens.

Lynner was followed by Paul Nicholson who had a large Korg-centric rig that included both a Minilogue, an MS-20 and an SQ-1 sequencer among other instruments. 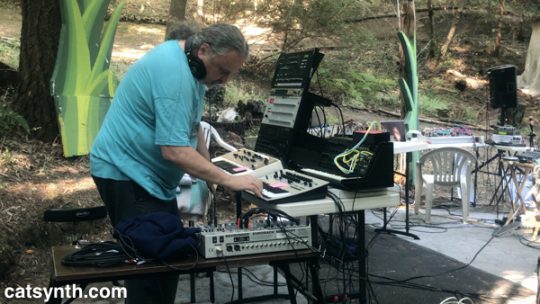 Then it was time for me to take the stage.  I brought a rig that included the large 9U modular, a Casio SK-1 and my trusty Moog Theremini. 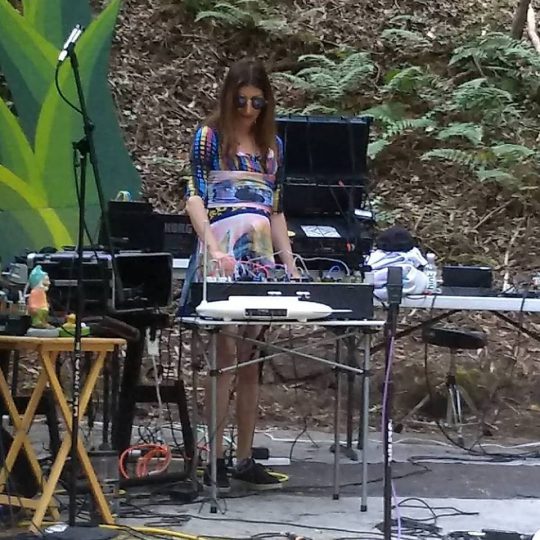 As with most of my recent solo work, I select one of my more formal compositions as a point of departure.  In this case, it was “White Wine”, with the melody set against one of the SK-1’s drum beats.  This them morphed into a broken and complex break of sound and eventually to a pure improvisation with the modular and theremin, though the beats never really disappeared.  As I was when listening to the other sets, I was thinking about the natural surroundings – in my case being the “city girl” mastering my place in space and sound, even if just for a few brief minutes.

The final set featured Lemon DeGeorge on harmonica and electronics. 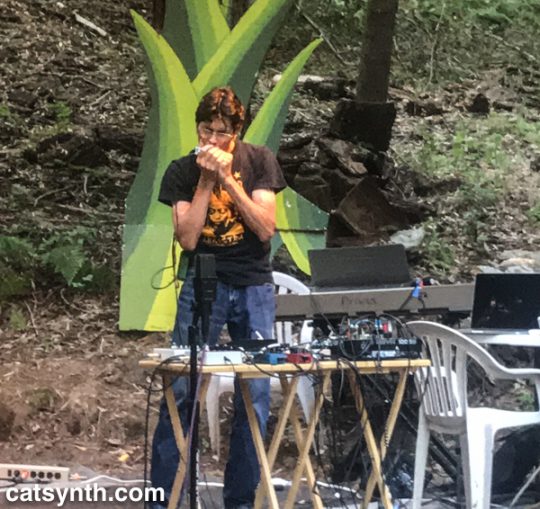 The harmonicas (like a true player of the instrument, he had more than one) added a unique dimension to the music, and the electronics followed with long breathy tones.  The sounds appeared to build up layers upon layers into something heavy and enveloping, but never overwhelming.  Compared to Nicholson’s sounds, DeGeorge’s lone tones and patterns were thoroughly inharmonic but no less beautiful or musical.

Overall it was a fine afternoon of weird electronic music in the woods, and not just for the music itself but for the fellowship with friends who I don’t get to see that often.   I remained in the mind space of the show, the environment, and the sounds for a while on the drive back, at least until reaching I-880 and heading first into Oakland and later home to San Francisco, where I snapped back into my everyday urban life.