The new year has brought plague and pestilence to CatSynth HQ, as I succumbed to the current vaccine-resistant strain of the flu.  It’s been mostly bed rest since Wednesday, but fortunately, I have Sam Sam nearby. 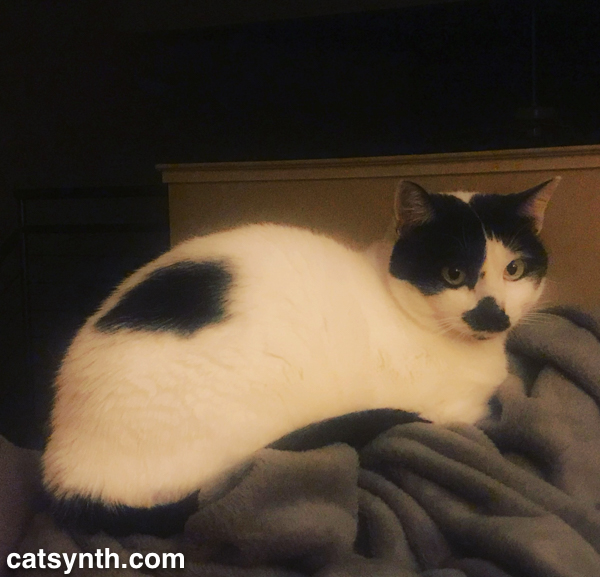 She has been affectionate and attentive, more so than usual.  I suspect that is also due to my having started working in an office again after being home with her for most of December.  That’s a story for another time.  In the meantime, we are enjoying one another’s company, even if I am low on energy and sometimes a bit delirious.  Here is a closeup of her. 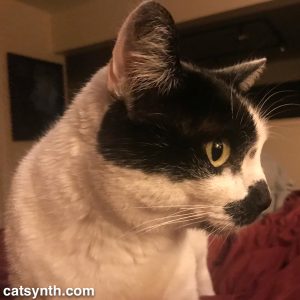 In a way, the illness and rest have extended the period of solitude and introspection from the last weeks of 2017, which I do not mind at all.  It’s given me more time to think about the vague ideas and plans that I have for this year, though it postpones getting started on any execution.  On the negative side, I had to cancel a gig today in Sacramento, extending what I call the “Sacramento Curse” where every planned show in that city since the beginning of 2014 has been missed for one reason or another (the first and most dramatic being one that was canceled due to a massive fire near the venue – fortunately, no one was hurt and the venue was fine afterwards).  It has also slowed down activity that requires looking at screens for prolonged periods.  I made an exception to get this post out.

Lying down and letting one’s mind wander with a slight fever does lead to interesting thoughts.  A different experience from The Disintegration of Thought during periods of health, but interesting nonetheless.  Some are complete nonsense, but others are consistent with introspection and what it takes to try and be happy and healthy in these challenging times.  The roles of fear and caution are part of that internal dialog, as well as creativity in general.   Perhaps I will have more to say about them as I return to health, perhaps not.