I found myself back again in Napa Valley wine country a couple of weeks ago.  Specifically I was in St. Helena to meet Elsie the Library Cat.  I am not a morning individual, but Elsie apparently is, so at the early hour of 7AM, I headed up from San Francisco, crossing two bridges before exiting the I-80 onto Highway 29. 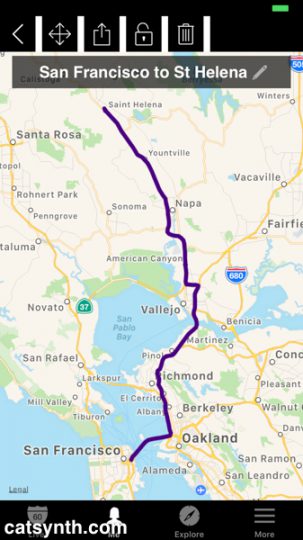 I have written about traveling through the Napa Valley on Highway 29 before, specifically in a post from 2007.  Once again Highway 29, multiplexed with Highway 12, was a parking lot south of the city of Napa, so I was once again able to snap a photo at almost the same exact location.  It was quite theraputic to do so, chasing away some of the demons of 2007, which themselves chased out the demons of 2000.  The road has been upgraded into a better expressway, and Highway 221 (just a short connector to downtown) is now signed. 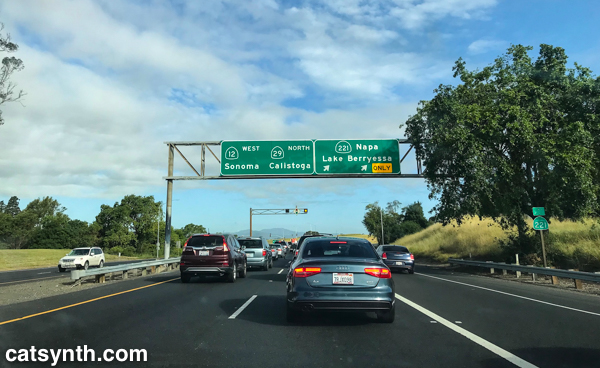 The traffic thinned out north of Napa as the road narrowed north of Yountville.  Here the landscape is dotted with modest vinyards and over-the-top mansions and tasting rooms.  Finally, I arrived in St. Helena, my favorite town in the region.  I pulled into the library parking lot around 9AM, just in time for my visit with Elsie. 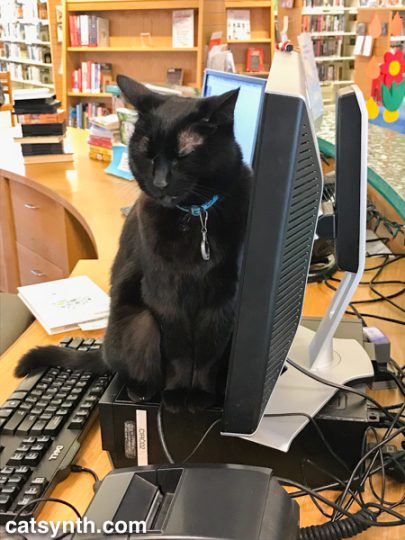 Elsie is a very sweet cat, and quite playful at times despite her advancing age.  With her black coat, she reminded me a bit of Luna, though Elsie has mismatched-colored eyes compared to Luna’s emerald green.   She and the staff of the St. Helena Public Library were great hosts and extremely welcoming of me and my video project.  If you haven’t already seen our CatSynth TV feature on Elsie, you can watch it here.

It was still relatively early when I finished at the library, so I headed to the main street in town for brunch – a protein-heavy heuvos rancheros and some additional coffee seemed like a good idea after the morning video shoot and before heading out for wine tasting.

My main winery destination was Flora Springs, also in St. Helena.  In 2014, I had come here for both wine tasting and a photo shoot – you can see one of the photos in this old Wordless Wednesday post.  I had selected it because of the modernist architecture and interior design, but I enjoyed the spicy bold reds as well.  Plus they have a patio that is lovely on a warm afternoon. 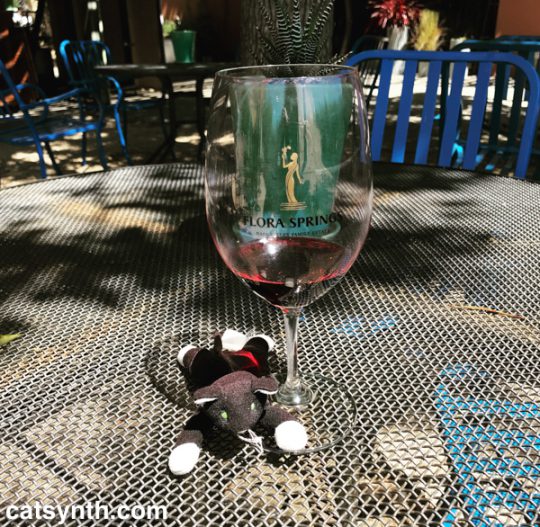 The same qualities that attracted me to this winery four years ago were in play again – the modern style and bold red wines.  I particularly liked the Trilogy red blend and the Holy Smoke single-vinyard cabernet from Oakville.   This visit was also featured on CatSynth TV.

Having enjoyed a full glass of both the Trilogy and Holy Smoke along with tastings of the standards, I decided I shouldn’t do anymore tasting for a while.  But I still wanted to some more exploring.  So instead of heading straight back south, I turned east onto Highway 128 in Rutherford towards Lake Berryessa, with the goal of finally completing the route.  (Yes, I am weird that way.) 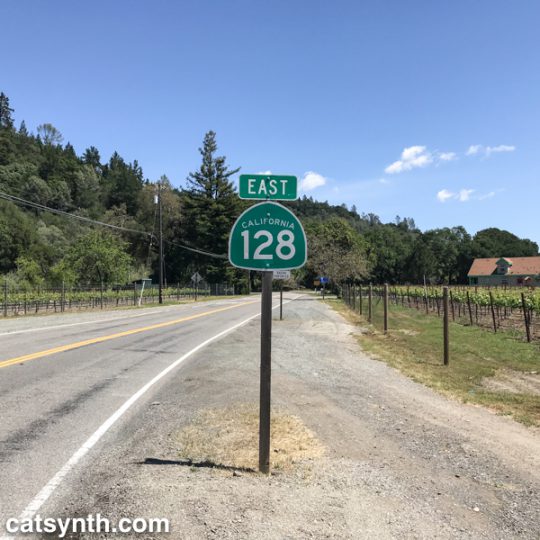 The narrow but well maintained highway took us out of the valley and into the hills to the east, winding our way through several canyons.  The central towns of the Napa Valley were largely spared from last fall’s devasting fires, but here along Highway 128 one could still see some of the scars from the Atlas Fire.  The green wooded hillsides were periodically streaked with bands of ashen gray and bare trees.  But even within those bands, one could see bits of green.  Some of these were trees that were spared during the fire, which jumps from one tree to another, as well as new growth replacing the burns.  It’s amazing to see how quickly nature bounces back, especially compared to human development.  It will take a bit longer to replace the homes, wineries and other businesses, and the mental and emotional scars may never heal. 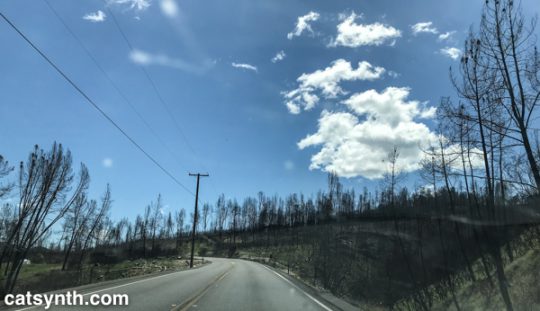 Eventually, the highway aligns to the southern shore of Lake Berryessa, an artificial lake created by damming the Putah Creek.  It’s quite large and major center for water recreation.  I was just there for the visual aspect – I was particularly curious to see the “Glory Hole.” 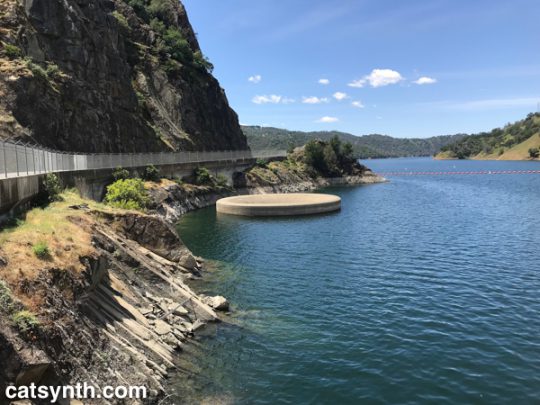 The Glory Hole, which as also featured in a recent Wordless Wednesday post, is an internal spillway for the reservoir. When the lake gets too full, the water drains out through it like a bathtub.  This happened in 2017, and must have been amazing to see.

We followed the highway down from hills into the Sacramento Valley, where it ends in the town of Winters.  I had stopped here on the way to Portland a few weeks earlier, so had already shot some video.  But that one is still a work in progress…

See more of California’s Napa Valley Wine Country and many other fascinating places in our Highway☆ app, available on the Apple App Store and Google Play Store.