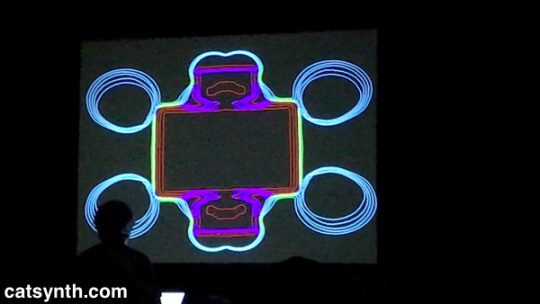 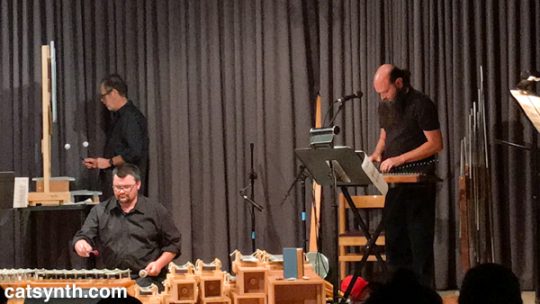 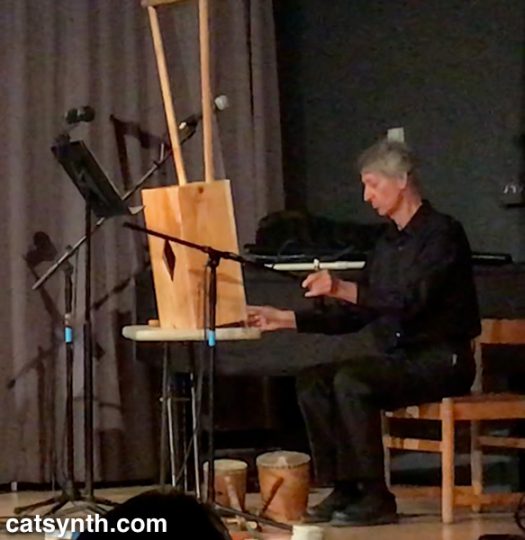 Today we look back at the recent performance by Pet the Tiger invented instrument collective in Golden Gate Park. It was part of a series hosted by Dan Gottwald featuring invented-instrument performances in the tunnel near the Conservatory of Flowers. You can see and hear excerpts from the concert this CatSynth TV video.

The centerpiece of the performance was the harmonic-series gamelan, a set of instruments that employ tuning based exclusively on the harmonic series. This leads to just-intonation relationships among pitches, but not necessarily those of conventional Western twelve-tone music. The results are haunting and exquisite. This is especially true of the 5-octave metallophone demonstrated by David Samas in the video, and played by Samas and others in the concert.

There was also a large kalimba-like instrument performed primarily by Samas and Derek Drudge, and a large instrument created and played by Bart Hopkin.

In addition to the metallophones, there were various wind instruments. Peter Whitehead played an instrument that resembled a longitudinal bass flute, and whirling tubes, all of which also conformed to the harmonic series.

There was also a stringed instrument performed by Ian Saxton.

Harmonic series relationships are well known to be very pleasant to the ear, and there was an overall pleasing tone to the music, amplified by the acoustic properties of the tunnel, the lighting and the fellowship of performers and audience. In addition to the long meditative pieces, there were sections combining music with anxious dystopian poetry, and even a rendition of George Harrison’s “Within You Without You” from Sgt. Pepper’s Lonely Hearts Club Band.

Overall, it was a lovely and poignant evening, with the light show from the Conservatory of Flowers in the distance and a warm friendly atmosphere in the tunnel that mitigated the approaching chill of the night in Golden Gate Park. The series is over for the season, but we do expect to hear more of Pet the Tiger and these inventor-musicians in the near future.