There is a flyer in the bathroom at work extolling the virtues of team-building activities and also listing some dos and don’ts, such as making sure it’s something that everyone can participate in, doesn’t cause difficulty or embarrassment for some members, etc. Reading this brought to mind an experience from over ten years ago that included the worst team-building event I have ever participated in.

At the time, I was a manager in a department with extremely high talent but low morale. There were many reasons for this, including workload, changing priorities, and toxic aspects of the company culture. In the midst of this, our director decided to hold a team-building event, an ostensibly fun outing at an indoor Go Kart track along US 101 in one of the towns south of San Francisco. For those who are not familiar with Go Karts, they are essentially mini cars that don’t have reverse, or even brakes just an accelerator and a steering wheel. They don’t reach particularly high speeds and drivers wear helmets and seat belts. So it’s generally a safe activity, but there is some element of risk. And it can get competitive very quickly.

Our own experience turned both highly competitive and somewhat risky rather quickly. After a few minutes of hanging out in the lounge and talking with colleagues, we were ushered into the car area for a quick orientation and safety drill, and then given our helmets and cars. And we were off and racing. It was a miserable experience from the start. The inability to use breaks, the clumsiness of the steering, and the inability to go into reverse after bumping into a track wall made it difficult and confusing. I decided it was just something to endure for as long as I needed to, and just proceed slowly and cautiously. Our race was the second, with the first one already confirming some of the worst competitive aspects of some members of our team. This included our department director, as well as some of the other “leaders” who engaged in macho trash talk and were clearly focused on winning. Not that some of the women weren’t having a great time: our team’s HR liaison was with us and she was clearly enjoying herself. And that’s all well and good, but none of it was team building.

I tried my best to be a good sport and play along, moving slowly and cautiously around the track as our more competitive members speed past. A screen announced the standings after each lap, and I was falling further and further behind. On one hand, I didn’t care. On the other, I was frustrated at the increased distance behind everyone else. This was a period of time where I was already feeling bullied and belittled by more aggressive colleagues and this experience was not helping. I decided to crank it up a notch, hit the accelerator, and give it one last good run.

I ran right into the wall at full speed. Actually, slightly under the wall, which was a rail with a large nerf-like baffle. My leg got wedged underneath. And remember, there is no reverse, so I had no way to back up and get out. Every attempt to get out only seemed to make things worse, as my leg got further stuck underneath. It was painful, and also terrifying. Finally, a worker made it out to the track and get me dislodged. Although in pain, I was able to walk and limped off the track, where I was severely chastised for going too fast.

Nothing was broken, but it was a small, deep, bloody gash. But it was painful. A bit of basic first aid and a bandage was all that was needed medically, and after about a week it mostly healed. But to this day, I have a small “depression” in my leg where the injury occurred. 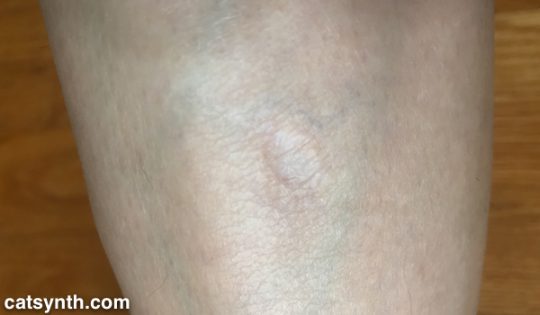 Fortunately, it’s not really visible to anyone who doesn’t know it’s there.

Back to the event itself. I was done for the rest of the day and wandered outside on the stoop of the building. The warm sunshine and the sound of traffic from 101 were emotionally soothing and a nice counterpoint to adrenaline-laced intensity and competition of the event. I also found two of my colleagues there who had opted out for various medical reasons. We struck up a nice and far-ranging conversation – I don’t remember what we talked about, but probably included music, theater, art, and technology. If there was any actual team building from this outing, it happened here next to parking lot with my colleagues who also were not participating in the main event. I would posit that there was no team building whatsoever from the main event. A few takeaways:

A simple afternoon a bar or pub would have been much better from my perspective, or honestly anything else that made more of an effort to make everyone feel welcome and included.  I may not particularly enjoy karaoke, but can certainly have a good time and feel welcome.  Beyond these specifics on “team building”, the event sent to me and probably to others a really negative message about the company’s culture and values. Over the next year or so, these concerns were often borne out in the workplace, where bullying and competitiveness were not only tolerated but often rewarded. On the plus side, I did soon after this incident get a new director whose interest and temperament was much closer to my own 🙂