It was two years ago that Marlon, aka “Big Merp” came to live with us at CatSynth HQ! We had already known him for a while, but circumstances arose where he needed to find a new permanent home, and we were more than happy to oblige.

We first met him in 2018. He was living on the street in the Temescal section of Oakland, California.

Life on the streets can be rough, and it showed on his face. But he was incredibly friendly and loved people, and enjoyed coming indoors to hang out. He was clearly a former house cat, likely abandoned. We’re glad we found him and gave him a home. The posh indoor life has been good to him.

Big Merp is a “synth cat” – he loves to get up on the main instrument desk to be close to the action. There is the iconic photo lounging with the Novation LaunchPad Pro and Arturia MicroFreak above, as well as many others.

Although he bonded with the humans right away (including visitors), things were a bit more difficult with Sam Sam. She was not happy with this newcomer to her home and tried her best to avoid him for quite a while. Over time, however, her confidence returned and the two grew more comfortable with each other’s presence. They may not be the best of friends, but they do at least accept one another and share space.

It’s the 4th anniversary of Sam Sam’s arrival at CatSynth HQ. It’s hard to believe it’s already been four years, but it’s also hard to imagine life here without her.

On December 7, 2016, I brought Luna’s ashes home. On that same day, a friend drove up from Southern California to San Francisco to deliver Sam Sam. Quite a transition.

Sam Sam was rather timid at first, spending most of her time under the bed, but coming out to eat but also to explore and give her little characteristic squeaks. It wasn’t surprising that she was a little skittish. She was thrust into a completely new place and situation, after a serious of stressful homes. But she soon adjusted and become comfortable, and her goofy and sassy personality blossemed.

This was a paradise for her, and she loved being spoiled. But in 2019, her world was once again upended with the arrival of Big Merp. She didn’t welcome this new “interloper”. It has taken a lot of time and work from all of us at CatSynth HQ over the past year, but we got them to the point where they could at least tolerate one another, and now they can even spend time together, if not somewhat warily.

“Little Sam Sam” continues to delight us all with her little voice and her cute antics. We love her dearly.

It’s been exactly two years since Sam Sam made the long trip from southern California to come live with us at CatSynth HQ!  And not a day goes by that we are not grateful to have her in our lives.  I’m pretty sure she feels the same way.

Samantha, or “little Sam Sam”, had a complicated life.  She started out (as far as we know) in the suburbs south of San Francisco, and then moved with her human to the high desert north of Los Angeles – we like to joke that she lived “out in back of Palmdale where the turkey farmers run” in tribute to one of our musical heroes, Frank Zappa.

When her human passed away, she then went to live with his sister, also in southern California.  Unfortunately, the sister’s health was declining and another cat bullied Sam Sam, so this was not a happy chapter for her.  As her new human was preparing to go into assisted living, Sam Sam needed a new home.

In December of 2016, I was still deeply grieving after Luna’s death – and also reeling for the shock and horror of the election.  I hadn’t yet prepared to welcome another cat into my life, but when a friend and bandmate reached out to me that he needed to find a new home for a sweet cat whose human was headed to assisted living – and then shared her adorable photos, I said yes.  How could I not?

At first, Sam Sam was exceedingly shy and skittish, spending most of her time hiding under the bed, coming out only for food, water, and the litter box.  She was mostly silent but occasionally emitted these tiny squeaks.  As she adjusted to her new home, her personality blossomed.  She’s quite friendly, vocal, outgoing, and quite a ham.

And she has no trouble demanding exactly what she wants from her humans.

We close with this episode of CatSynth TV featuring Sam Sam is all her adorableness.

It was one year ago today that Sam Sam came to live at CatSynth HQ, and we are wishing her a very happy first Gotcha Day (adoption anniversary)!

A year ago I was still in the early part of my grieving process for Luna, who had passed away just a little over a month earlier.  Getting another cat was always the plan, but not quite so soon.  But our friends Michael de la Cuesta (of Vacuum Tree Head) and Karen de la Cuesta told me about this sweet cat they needed to rehome – her longtime human had passed away a year earlier, and she needed to leave her current home in southern California.  I, of course, said yes.  So on December 7, 2016, she made the journey north to San Francisco and stepped in HQ for the first time.  Not surprisingly, “Sam Sam” was a bit shy and skittish at first, spending most of her time under the bed, sneaking out periodically for food, water, and the litter box.  But bit by bit she came out her shell and blossomed into a wonderful companion.  She is quite talkative and outgoing now – even a bit sassy at times 😸

She delights many with her unique markings and quirky antics.

Happy Gotcha Day, Sam Sam!  We are so glad you came to live with us, and we hope to spend many years together 💕

Today would have been Luna’s 12th Gotcha Day, 12 years since I first brought her home. And a little over 7 months since she left us.

As with any deep loss, one starts to dwell less upon it over time. Sam Sam’s presence has played a strong role in that. But I did catch myself saying “Luna” to try and get her attention the other day. It doesn’t happen often, but I notice when it does.

I want to celebrate her life and the many years we had together. She was a constant presence, a soulmate, and of course a fine feline model full of grace and elegance. So please indulge me in this series of photos.

But emotions work in strange ways. Sitting down to write this, opening up the editor and typing, has caused my heart to sink and my eyes to water up. I would say this is healthy, given the deepness of our relationship and the magnitude of the loss. There is a very specific sadness associated with grief. It builds slowly and lingers for quite a while, and then can suddenly burst forth, usually in response to another’s emotions or sympathy. I expect that process will play out again today. I am grateful for the many good things that have unfolded in life since she passed, but I still miss her so much.

Today marks Luna’s 11th Gotcha Day (adoption anniversary) since I first brought her home from the Santa Cruz County animal shelter on June 10, 2005. She has come to be the queen of her home in the years since.

This Gotcha Day is a particularly sweet one, considering all that has happened over the past year. It was about one month after her previous anniversary that we saw the first signs of her cancer and got the formal diagnosis soon after. She was given only months at best with aggressive treatment. But with love, attention and the best medical care available, she is still with us a year later and thriving!

And she is still the star of CatSynth. 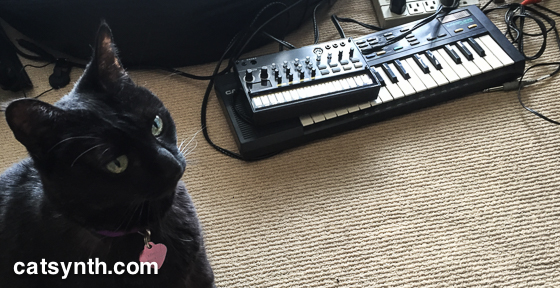 We are looking forward to a weekend of celebration and treats. 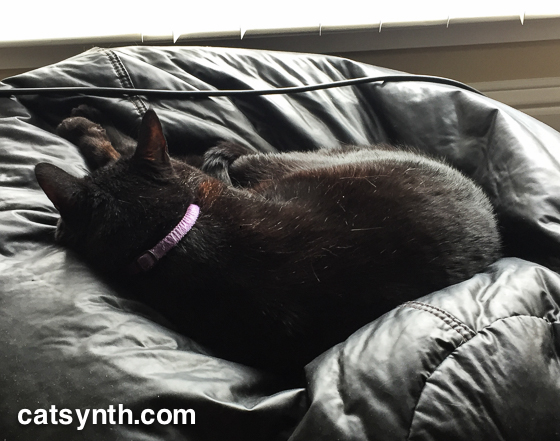 It was exactly ten years ago, June 10, 2005, that I brought Luna home from the Santa Cruz County animal shelter. And so we are celebrating her 10th “Gotcha Day” (adoption anniversary) over the next few days in style. It began the evening before with a festive meal, complete with main course, treats, and a “cocktail.”

The “cake” didn’t quite come out of the can perfectly, but as we can see that did not bother Luna at all. She devoured her special dinner with enthusiasm.

It is hard to believe that 10 years have gone by, but it is hold hard to imagine life without my special little girl. We have been through a lot together – adventures and transitions – more than be documented on these pages.

Here is her official photo from animal shelter, followed by a portrait from her first week at home.

At the time, she was 7 months old. Still a baby in many ways. Over the years, I have watched her grow into a beautiful cat. Here are just a few photos, including one of the most recent.

We are certainly looking forward to many more years and adventures together, wherever life leads us. Please join me in wishing Luna a Happy 10th Gotcha Day!

It has been exactly 9 years since I first brought Luna home from the Santa Cruz County animal shelter. This was her official photo from the shelter.

It was already clear with that face and those green eyes she was going to grow up to be a beautiful cat. And she has been a sweet and faithful animal companion for almost a decade now.

Please join me in wishing Luna a Happy Gotcha Day!

Today, June 10, is the eighth anniversary of Luna’s adoption, otherwise known as her “gotcha day.” We woke up to find this wonderful graphic waiting at The Cat Blogosphere:

After eight years, Luna continues to make every day a delight I certainly hope I do the same for her.

We will celebrate this evening, but in the meantime, please join me in wishing Luna a Happy Gotcha Day!

This Sunday (June 10) is Luna’s adoption anniversary, otherwise known as her “Gotcha Day”.

It has been seven years since I encountered her at the Santa Cruz County Animal Shelter and she chose me. Here is her official shelter photo:

Luna has of course grown up a lot over the years, but in some ways she hasn’t changed much. Here are some very recent Instagram photos of her: