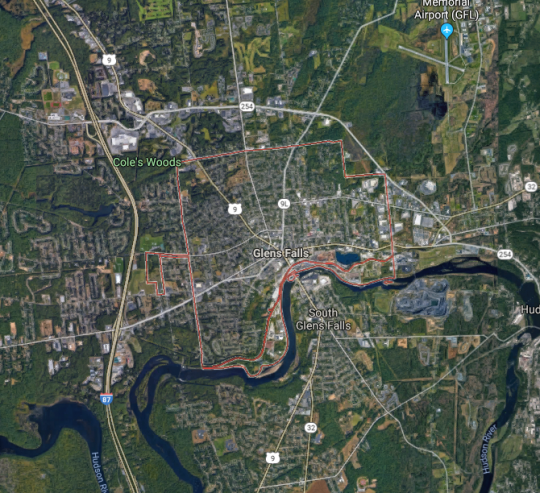 Today we look at the city of Kingston, New York. Kingston is about 90 miles north of New York City on the west bank of the Hudson River. It was the first state capital of New York in 1777. For those of us in the world of electronic and experimental music, the city is the current home of renowned composer and musical innovator Pauline Oliveros as well as the Deep Listening Institute which she founded.

Kingston is also the location of one of the most obscure and oddest Interstate highways, I-587.

I-587, known as Colonel Chandler Drive, is co-signed with NY 28. It is a full freeway from it’s start at a traffic circle near the New York State Thruway (I-87) to its eastern terminus at an intersection with NY 32 (Albany Avenue) in downtown Kingston. Other than its termini, it has no exits. It also never meets its parent route, I-87, though the traffic circle at the western end does connect to Exit 19 of the Thruway.

I-587 is signed along its route and at either end, but there is no mention of it on signs for Exit 19 on the Thruway. Thus, travelers on I-87 would never even know its there unless they took the exit and encountered the signs at the traffic circle.

By coincidence, I will participating in a performance of Pauline Oliveros’ The Heart Chant with the Cardow Choir at this year’s Garden of Memory event in Oakland. You can read past reviews of this unique yearly event and here. As for The Heart Chant itself:

This participatory Deep Listening meditation is a gesture of sonic healing for all beings and circumstances that need healing. It was created in response to the terrorist attacks of September 11, 2001. “Ah” is a vocal sound associated with the heart shakra.

Anyone at the Chapel of the Chimes tonight is welcome to participate in singing this piece. There will also be numerous other performances by noted Bay Area musicians, and I hope to see as many of them as I can. You can follow along with me on Twitter @catsynth with hashtag #gardenofmemory.