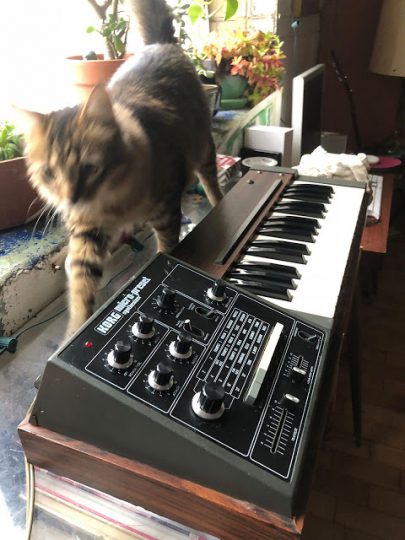 The Korg Micro Preset synthesizer is a curious late 1970s beast with a slightly bizarre matrix of pre-set sounds, including woodwind and similar noises and a keyboard all housed in a wooden box! It’s a 32-note monophonic preset synthesizer with 6 push-button presets including voice, synth1, synth2, brass, string, and wood. Its single-oscillator design has only rudimentary decay/release envelope controls and no access to the guts of the sound generation stuff.

Once you’re past the outward appearance, a bit of probing will reveal a noise box that sounds remarkably similar to the MS-10 at times. There is a lot of fun to be had with the ‘traveller’ control, a sort of filter and resonance control rolled into one, offering interesting squelchy acid-style bass run effects. In fact, like the MS-10, bass is the best of what you get out of this guy along with lots of other useful noises. Add N To (X), The Human League, OMD, Jean Michel Jarre, OMD, Pop Will Eat Itself and Brian Eno are thought to have used the Micro Preset.

A few of the presets are slightly quieter. Easily addressed by turning the volume up. Since this Keyboard was only ever used in our smoke free studio, we never had a tech fix it. Our tech HAD seen this issue before and did say the fix would take 1hr and require minimal parts he, and thusly most techs, should have. This thing sounds amazing straight into a delay pedal and then a DI. Only selling it because we loved it so much we bought 2 but need only one. It’s killer for when you want a simple MS-10/20 sound but don’t want to fuss about. It’s been on a ton of records made here. Great and affordable addition to any collection and would be a great first synth.”