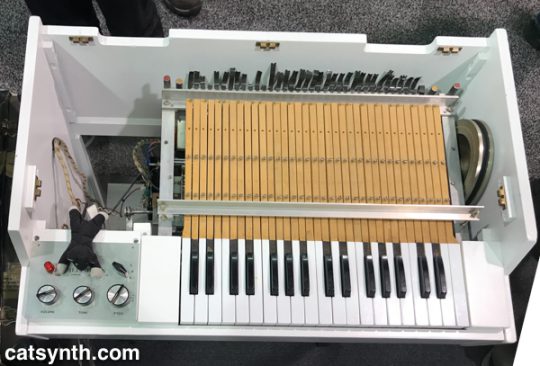 We at CatSynth have a soft spot for the Mellotron, the electro-mechanical precursor to digital samplers made famous in recordings by the Beatles – remember the opening flute riff from “Strawberry Fields” – as well as King Crimson, and many others.  We have used sounds from the Mellotron in our own music and in collaborations with Vacuum Tree Head.  So was a treat to visit the Mellotron booth at NAMM and see versions both old and new.  We featured them in a recent CatSynth TV. It is particularly interesting to see the inside of the vintage Mk2 in action.

The Mellotrons (and their predecessor, the Chamberlain) generate sound by passing a tape head over a strip of magnetic tape for a particular pressed key.  The sound is determined by the tape, the speed of the head, and other idiosyncratic factors of the instrument.  Although originally intended as home/parlor instruments, they found a place in the rock albums of the 1960s and 1970s before falling out of favor for digital samplers.  They were heavy, temperamental, and difficult to maintain.  But Mellotrons have had a bit of a revival in the early 21st century with a reissue of the electromechanical version as the Mellotron M4000 and its all-digital counterpart, the M4000D.  Most recently, the new Mellotron line has been extended with the M4000D Micro. 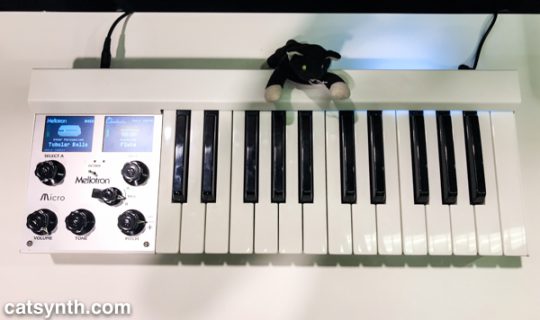 The Micro has most of the features of the larger digital Mellotrons, including a large library of samples from original Mellotron and Chamberlain tapes.  Two different “tapes” can be loaded at once and blended with a mixer control. It has speed and tone controls, and a post-sample audio engine that adds some of the non-linear characteristics of the originals. The Micro is an attractive size (and at $990 is the least expensive) for those who want a playable portable version of the celebrated instrument.  There are less expensive ways to get some of the sounds – we have the Mellotron XL app for iOS that has been sanctioned by the company, but it doesn’t have MIDI support they way the standalone instruments do.   Good patches can be found in the Nord Sample Library (see our recent Nord article) as well as older instruments such as the trusty E-MU Vintage Pro that we use at CatSynth HQ.  But the M4000D series is the closest one can find digitally to the original – if that is important to one’s music, these instruments are worth checking out.