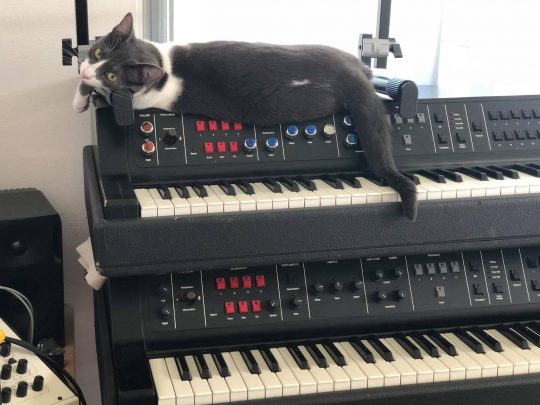 Gracie returns.  This time with not one but two of the rare Synergy synthesizer from Digital Keyboards.  Submitted by our friend Alsún Ní Chasaide via Facebook. 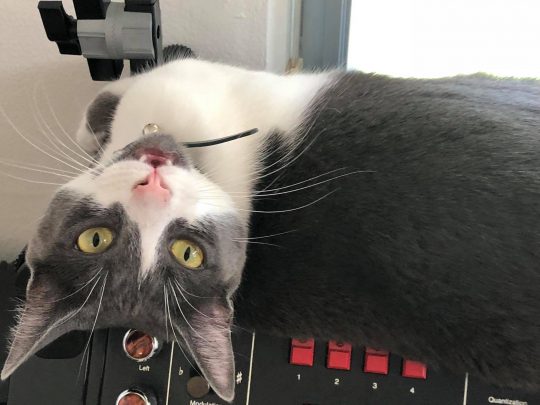 Gracie is absolutely adorable with her poses on the synth 😻.  But she has also chosen a very interesting instrument.  The Synergy is a hardware additive synthesizer with 32 digital oscillators and various modulation sources.  Additive synthesis requires a lot of resources in hardware (i.e., compared to FM), and the Synergy carried a hefty price tag.  There aren’t that many of them in operation today, so it’s quite amazing to see two of them in the same place at once.

The Synergy is a digital additive synthesizer manufactured from 1982 to 1985. Of the approximately 700 to 800 that were produced, it is estimated that less than 100 may still be in operation today. In the 1970’s, Bell Laboratories developed a high-speed additive oscillator system which was used by Digital Keyboards, a US-based division of the Italian synth/organ maker Crumar, to create a sophisticated additive synthesizer known as the Crumar General Development System (GDS). The GDS originally sold for about $27,500. The Synergy was essentially a lower-cost version of the GDS, without all the programmability of the GDS, and a price tag closer to $5,300…

…Although the Synergy is not programmable, it does feature 24 tone presets (with many more available via 24-tone cartridges). The sounds are generated by additive synthesis and phase modulation using 32 digital oscillators, computer controlled, and allocated dynamically. Polyphony is variable, depending on the selected tone preset.

You can see some of Gracie’s previous appearances via this link.