A rather blue photo of the Bay Bridge in San Francisco using Hipstamatic, taken on a beautiful summer-like day this past weekend.

A hopeful image as we all embark on a new chapter. 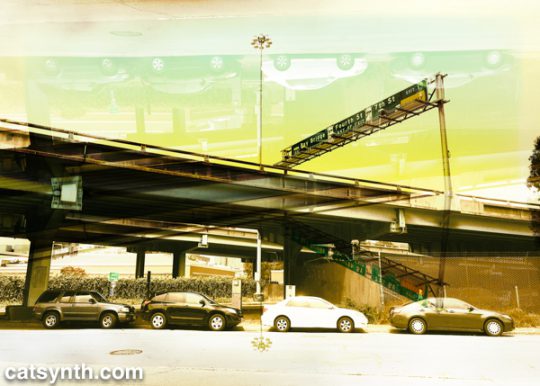 I-80 towards the Bay Bridge from Kate St.

This past Saturday, November 12, marked the 75th anniversary of the opening of the San Francisco – Oakland Bay Bridge, known conventionally as “The Bay Bridge.” It is a regular part of life for many of us here, one of our main connections to the communities across the bay and a principal landmark during walks in my part of the city. It has been featured in many previous articles here on CatSynth.

The Bay Bridge is a workhorse, spanning over 4 miles and carrying an estimated 270,000 vehicles a day, making it second busiest in the U.S. after the George Washington Bridge in New York. But the western double-span is quite a beautiful structure, both as seen from the hills of San Francisco and from up close.

Don’t let that last photograph fool you. Even though it may look like it was taken 75 years ago, it was actually taken yesterday using the iPhone Hipstamatic app during an early afternoon walk by the bridge.

It was quite an engineering feat when it was built, the longest bridge of its time and built in challenging geography of the bay.

This video (as seen on the official Bay Bridge info site) captures both the era and the engineering:

Much like the Brooklyn bridge when it was first built, the Bay Bridge towered over the surrounding architecture of the cities it connected. It is anchored in the middle to Yerba Buena island with tunnels connecting the two spans of the bridges. On the the San Francisco side, it is anchored to Rincon Hill, once an upscale neighborhood in the late 1800s that fell into rapid decline and largely destroyed in the 1906 quake. The eastern bridge was built resting on mud rather than bedrock. It was the most expensive bridge built to date.

The idea of a bridge crossing the bay has been around since the 1800s. Indeed, such a bridge was proposed by Emperor Norton in the 1870s (I think this even made it into Gino Robair’s opera I Norton). But unlike his other proclamations, this one seemed like a good idea. After that, there were many proposals, such as this one that in some ways resembles the bridge that was actually built.

When bridge first opened, it carried US Highways 40 and 50 as well as the trains from the Key System in the East Bay. The upper deck had longer ramps leading to Harrison and Bryant Streets at 5th, roughly the same as the rather long ramps at those streets today. On the Oakland side, the bridge had viaducts from Cypress Street (Highway 17) as well as San Pablo Avenue and the Eastshore Highway (US 40). The bridge now carries Interstate 80 across the bay. The railway is long gone. Gone also are the connections to the old Transbay Terminal and Embarcadero Freeway, both of which have been demolished. The area under the bridge on the San Francisco side, once a gritty industrial waterfront, is now a picturesque boulevard that is great for walking. Through all of the changes, the bridge itself has not changed very much at all…

…until now. The eastern truss span, which was badly damaged in the 1989 earthquake, is now being replaced with a new more graceful cable-stayed span. The construction has progressed to the point where the tower is in place and the cables are being hung. It is indeed a bit distracting when traveling the bridge. But I am looking forward to seeing it completed, probably around the 77th anniversary in 2013.

The Bay Bridge has been closed over the Labor Day weekend for a major engineering feat. As part of the replacement of the eastern span, engineers actually cut out a small section near Yerba Buena Island, and actually wheeled in a new section of bridge. This allows the old doomed bridge to be used while the new one is connected up to the island.

Looking towards Oakland from Yerba Buena island, this is what things looked like before the cut- and-replace operation:

You can see a lot more time-lapsed photos and different angles at the official website for the project. They also posted some photos that better illustrate the move itself at Twitter:

[Click on the images above for full-size versions at TwitPic]

Note that this does not really affect the western half of the bridge near on the San Francisco side, which is what we usually show in our Bay Bridge posts and photos at CatSynth. Except of course that it is closed.

And it looks like the closure could be a little bit longer than excepted. There was a serious crack found in one of the metal supports, so now they are working to repair that before opening. It’s just another reminder of why we want to replace the whole eastern span, hopefully before the next big earthquake. Fortunately, the closure doesn’t affect us at CatSynth all that much.