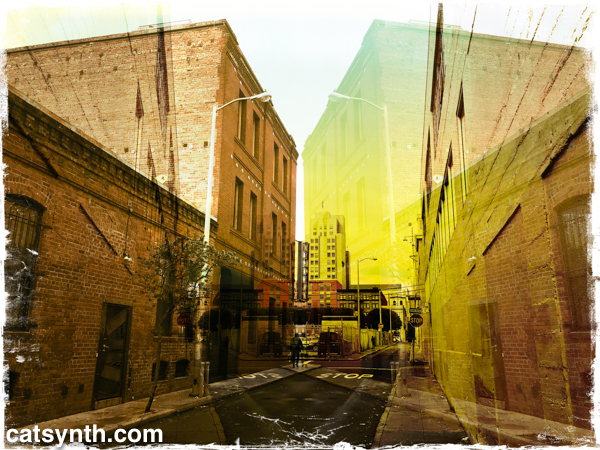 Mary Street, a small alley in the South of Market neighborhood of San Francisco. Tempest is a local bar visible in the middle of the image. More in the comments section.

Another perennial stop at NAMM is the ever-growing booth of Dave Smith Instruments. I had a chance to talk with one of the senior representatives on my regular use of the DSI Evolver in my live shows and my fondness for the instrument (despite the tendency of the knobs to fall off). I of course also had to play the Mopho because it was there:

But the real star of the booth this year was the Dave Smith Instruments Tempest, a collaboration of Dave Smith and Roger Linn.

I started with an existing pattern in the sequencer and immediately used the drum pads to subvert the pattern while attempting to remain in the tempo and meter. The pads are very comfortable and playable, and I found it quite intuitive to get different effects of each even without knowing in advance that they would do that.

This would be a great instrument to have in a live performance (and for recording as well), but probably something to ponder for a later time given its retail price of USD $1999.