Among the more unique instruments that we saw at NAMM this year was the Blipblox, a fully functional synthesizer in a plastic shell reminiscent of children’s toys. 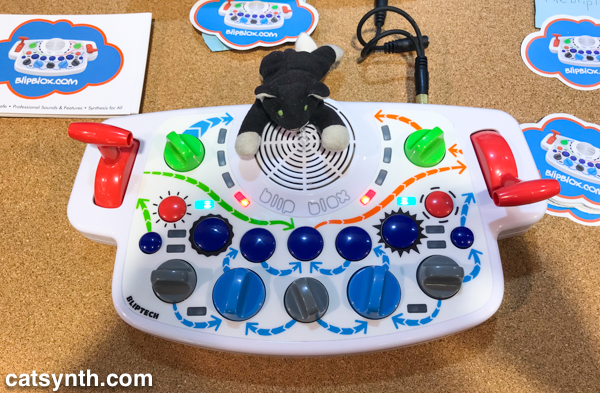 Don’t be deceived by its appearance. The Blipblox is a full-featured monophonic synthesizer with selectable signal topologies and oscillators; a low-pass filter; a sequencer; and even a drum machine.  There is also a modulation matrix to complete the feature set.  In some ways, it seems similar to overall style and concept of the Moog Mother-32, though it is of course a very different instrument.

You can hear a bit of our attempt to play the Blipblox in this video.

It certainly seems like an interesting way to introduce kids to synthesizers and both the science and art of sound.  But it also seems quite usable for live performance – if it’s rugged enough for kids, it’s probably rugged enough for the stage.  We look at it an immediately think of the repurposing of musical toys for experimental electronic performance via circuit bending.  Whether a Blipblox is bendable or not is beyond the scope of this initial look, but it would certainly fit in with a setup that includes such modified instruments.

More info can be found at https://blipblox.com/

As part of my wanderings around New York this past week, I had the opportunity to hear an evening of experimental music produced by Issue Project Room. The concert, at the Actors Fund Arts Center in Brooklyn, featured two ensembles that were quite different in terms of music and instrumentation.

The evening began with a performance by the Brooklyn-based Ashcan Orchestra. The group is a project of composer p. spadine and involved a variety of colorful toy instruments.

Through the set of four pieces, the members of the ensemble rotated around the instruments, beginning with a piece for an ensemble of toy bells. The bells were actually quite sonorous, and one would be hard pressed to recognize this as a piece performed with toy instruments if only listening and not observing the bright colors. The colors were nonetheless an important part of the presentation and even part of the musical score.

As the performers rotated, the orchestration and timbres became more varied and complex, including more drums and other louder instruments, giving the impression martial music (ableit martial music with toys). In the end, however, they rotated back to the bells for one final piece. The music and presentation was a lot of fun, and I thought they could have easily done another piece. But the set as it was had a good structure. It was nice to hear the ensembles treatments of traditional harmony and ideas reminiscent of early-twentieth century music.

The second half the concert featured a collaboration of Mind Over Mirrors, the project of resident artist Jaime Fennelly, and the ensemble Zelienople. Fenelly’s work involves the use of harmoniums together with electronics. The combination was impressive to look at.

At least one member of Zelienople also used a combination of harmonium and electronics, while others used guitars and other instruments to produce music similar to droning or “space rock” that we have discussed on this site before.

[Mind Over Mirrors and Zelienople.]

In this case, the music was performed as a soundtrack to Gone, a film by Donald Prokop. The film appeared to be winter suburban scenes familiar to any of us who grew up around New York City, with bare trees, ranch houses, and white snow. A lone figure occasionally appeared, walking or entering and exiting a car, and occasionally the scenes dissolved into wintery abstract color contours. Throughout, the music remained based on long drones, but veered between moderate pads and loud dramatic flourishes. The structure of the music and the film both added to a sense of listlessness and disorientation – this was an experience to simply lose oneself in.

Overall it was a strong evening of music, and the performance was well attended. I hope that I can continue to hear programs from Issue Project Room during my visits to New York.