As we get ready for our next Pitta of the Mind show this Thursday, March 8, we look back at our recent show at Pro Arts in Oakland, where we were joined by Usufruct, Alex Cruse, and Murder Murder.  You can see a bit of all four groups in this recent CatSynth TV episode.

Pitta of the Mind’s color theme (we always have a color or pattern theme) for this evening was blue and featured blue-themed poems by Maw Shein Win, many from her new book Invisible Gifts. 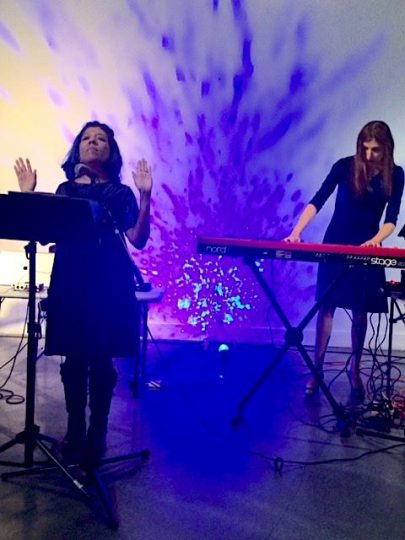 I used the Prophet 12 synthesizer, along with the modular system, my trusty Nord Stage, and some percussion instruments to create a musical interplay with the words as well as the space between them. 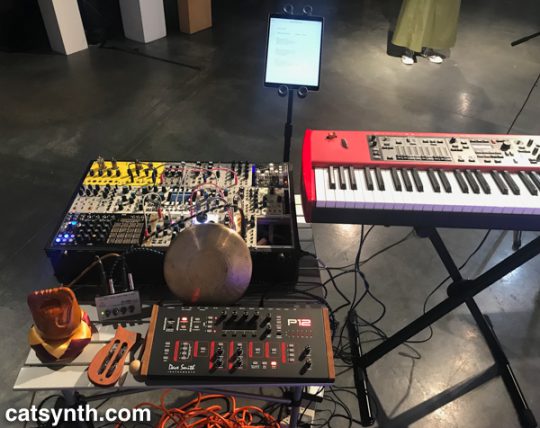 Even though we haven’t performed in a while and only had one rehearsal, I felt this was one of our strongest performances – and the feedback I got from the audience backed up that perception.  In particular, I think the poem “You Will Be With Me in a Town Called Paradise” came out particularly well, with a sultry vibe and jazzy accompaniment on electric piano.

After our set, Usufruct, the duo of Polly Moller Springhorn and Tim Walters took the stage. 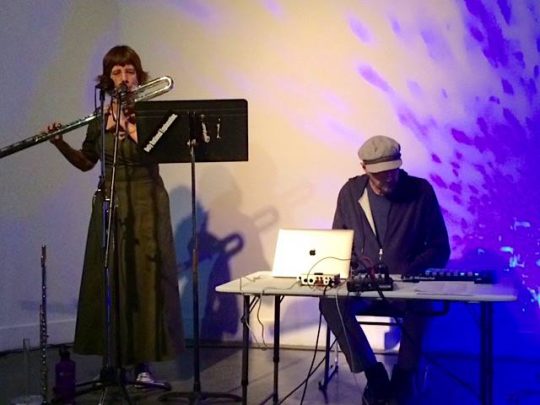 As the word “usufruct” implies, they make use of materials for which they have usage rights beyond ownership, such as public-domain text sources.  Polly’s vocal interpretations of the texts are processed electronically by Tim using custom programs written in SuperCollider.  The end result is simultaneously dark and playful.  But beyond the text sections, I was particularly taken with the instrumental portion at the beginning, which featured bass flute live and electronically processed.

Alex Cruse brought a very different vibe and sensibility to the evening, with an electronic performance that focused on beats, loops, and hits. 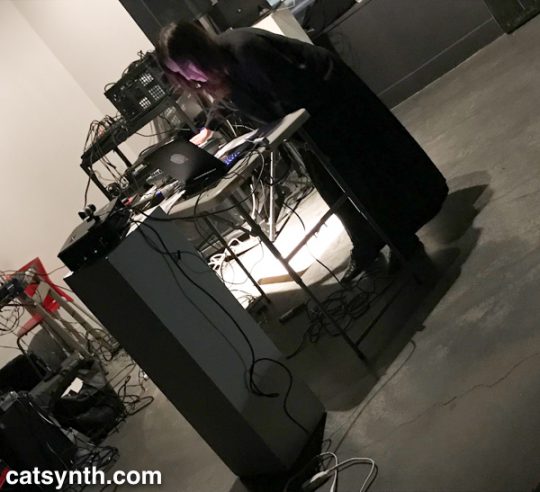 There were many delightful sounds and many hard-edged industrial noise moments as well.  The vocals were deliberately obscured by heavy distortion and other processing but provided a percussive element that worked well with the rhythms.

The final set by Murder Murder was again something altogether different.  With two drummers, two horns, two electronic performers, and vocals, it was nonstop intensity from the first drum hit. 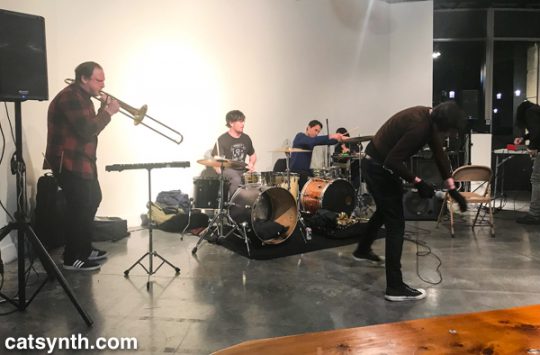 The intensity continued for several minutes and then came to a sudden close.  It was the musical equivalent of a tornado tearing through our calm evening of voice and electronics, but perhaps it was a fitting coda to the evening.

We thank Pro Arts and Sarah Lockhart for having us at this series, which has become quite a mainstay of the Oakland scene.  I hope to be back again soon with one of my other projects.  And of course, we are looking forward to our next Pitta of the Mind Show – where we will once again be joined by Usufruct – at the Luggage Store Gallery in San Francisco on Thursday, March 8 at 8 PM.