We are always on the lookout for something (or someone) different at NAMM, especially in the deep dark depth of Hall E.  This year we found it in the booth of Yudo, a company out of Japan that presented prototypes for two radically different concepts.

The flagship Neuman synthesizer features a standard keyboard with an instrument-spanning touch screen.  It looks like an iPad stretched out to fit a full-sized keyboard. 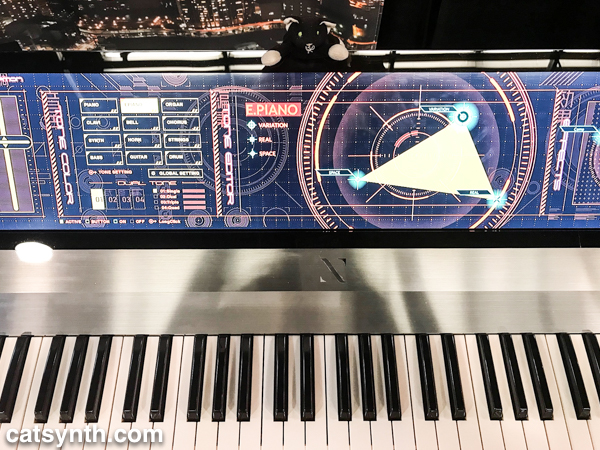 The keyboard plays well, and there were standard sounds such as electric pianos, brass, etc.  The touchscreen controls for the patches were fascinating, but not particularly intuitive.  It was hard to see using it for sound design in its current incarnation.  But it is a prototype with an estimated two years or more of development ahead, so we will see where things go.

At the opposite end of the spectrum is the KAMI-OTO, a small cardboard based keyboard controller to use with iPads.  It is a simple cardboard cutout that folds around a simple electronic main board and includes a stand for your tablet.  There are wired and Bluetooth models that go for $28 and $36, respectively via the company’s Kickstarter campaign. 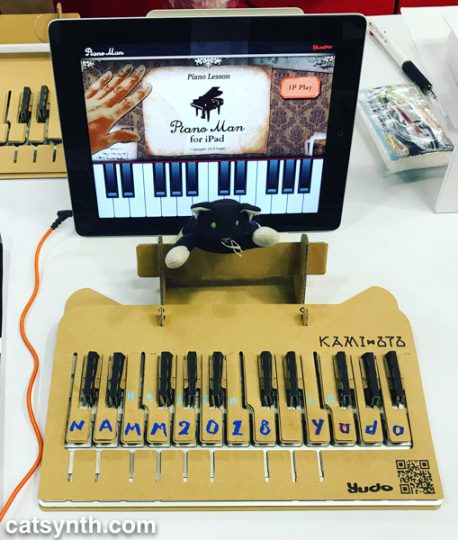 We did have a chance to try it out.  It is adorable, and it does look like a fun and simple DIY project to assemble. And there is some delight in being able to decorate it in whatever manner one desires.  As a keyboard, however, the latency was extremely high, which would render it less than usable for us in a performance setting.  Nonetheless, for composing on the run, it could come in handy.

More info about both products can be found at https://www.yudo.jp/en/.

Alone in a sea of cardboard:

Vast expanses of fun…on what is otherwise a dreary Saturday for us here at CatSynth. But the extended weekend is a good excuse to complete the major projects remaining at CatSynth HQ.

The rain is actually good news this weekend for our former hometown of Santa Cruz – there has been a major wildfire in the mountains to the east. It's actually near Loma Prieta, for which the 1989 earthquake was named. Sadly, many people have lost homes in the mountains. It's a sparsely populated area, where people specifically chose to live and make their homes. Animal rescue has been a major and so far successful component of the effort, with horses and other animals being brought to the county fairgrounds near Watsonville.

We are also sad to hear about the passing of one of our Weekend Cat Blogging friends, Bonnie Underfoot. Please visit them and offer your thoughts.

Weekend Cat Blogging is being hosted by Kate and Puddy at A Byootaful Life. It looks like our favorite Luna look-a-like is having a birthday this weekend!

The Bad Kitty Cats Festival of Chaos and Carnival of the Cats, hosted by the Catboys Realm and the M-Cats club, respectively, are both dedicated this weekend to Bonnie Underfoot.

And as always, the Friday Ark is at the modulator.