It’s been a little while since we last attended Church of Thee Super Serge at Robotspeak in San Francisco, but we made a point of going this past weekend.  For those who have not been there or read our past reviews, it’s an almost-ever-month show on a Saturday afternoon with live hardware-synthesizer performances.  As the name suggests, some acts do include Serge synthesizers, but it is not required, and a wide variety of instruments are used.  All three sets are featured in our most recent CatSynth TV episode.

The first set featured Lx Rudis performing on an Oberheim Xpander, a somewhat underappreciated instrument from the 1980s. 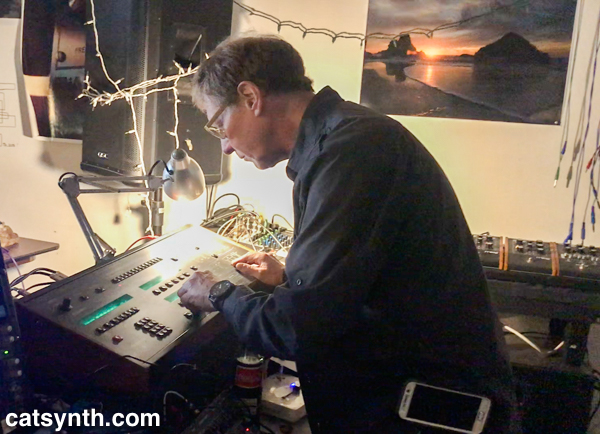 At its heart, the Xpander is a 6 voice analog synthesizer, but with a complex array of digital controls that can be programmed and applied independently to each voice.  Lx Rudis took full advantage of these, especially the LFOs and lag generators, to create subtle and minimal metric patterns.  He constantly moved voices in and out, configuring them on the fly, in a way that was very expressive and musical.  I particularly liked the sections which had staccato rhythmic textures against slowly moving timbres deliberately out of sync with one another.

Next up was Franck Martin, who performed a solo set on a modular synthesizer with several standalone instruments. 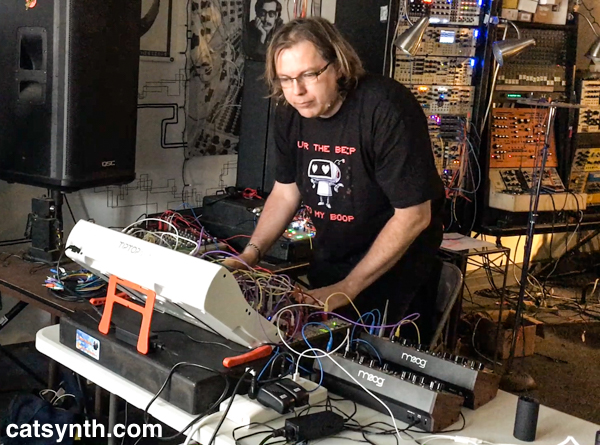 Martin’s setup included a Moog Subharmonicon, which he built while attending Moogfest this year (we at CatSynth are a bit envious), as well as a DFAM (Drummer From Another Mother).  There were also additional voices provided by Braids and Plaits modules from Mutable Instruments that he could bring in and out using a touch-plate interface.  The result was a slowly changing beat pattern with an eerie inharmonic voicing and gentle undulation.

The final set featured our friends Gino Robair and Tom Djll teaming up as the brilliantly named Unpopular Electronics. 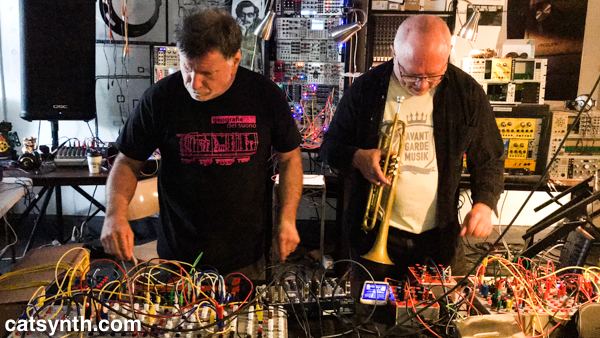 They had a wide variety of gear, including Serge panels in addition to Eurorack modules and standalone instruments from Bugbrand and others.  In addition, Gino had an interesting small case that included touchpads. 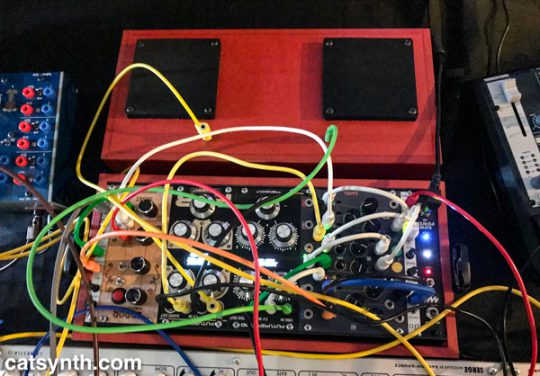 The music was frenetic and intense, an avalanche of pops and hits and loud cloudlike tone clusters.  And there were trumpet sounds entering into the mix at various points.  But there was an exquisite detail to the madness with changes among the different instruments and sounds, and musical pauses and rests before the pair dived back into the frenzy.  There were also many moments of humor and not just Djll’s book about why there aren’t any Zeppelin-style airships in the United States.

In between sets, it’s fun to browse around Robotspeak and see what’s for sale, or on display in the big glass case. 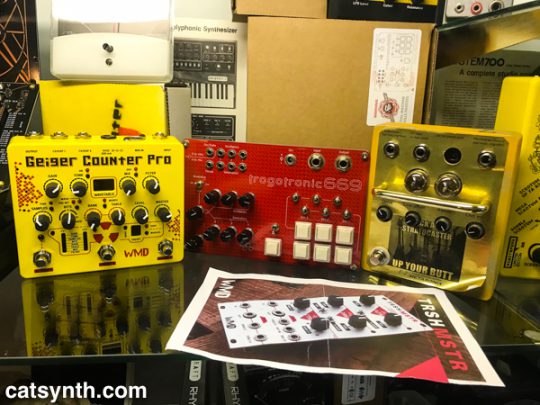 It’s also quite dangerous, as I am often tempted to leave with another module or instrument.  On this occasion, I exercised restraint, but probably not next time…

Our latest CatSynth TV documents yesterday’s edition of inWooble, a monthly synthesizer meetup and jam session at LinkedIn’s offices in downtown San Francisco. I had the opportunity to join this time, and had a good time performing with everyone – I particularly enjoyed the time where we were rhythmically together or forming complex contrapuntal textures across the six modular-synthesizer setups. And the views of downtown SF out the window were pretty cool, too.