Last weekend the Club Foot Orchestra teamed up with the San Francisco Silent Film Festival, to perform some of their “greatest hits”, contemporary live performances to silent film classics.  A full day of live music by the venerable and indefatigable ensemble!

The Club Foot Orchestra was started 25 years ago in 1983 by Richard Marriott (brass, winds), and still includes original member Beth Custer on woodwinds.  They were joined in this performance by Sheldon Brown (woodwinds), Will Bernard (guitar), Chris Grady (trumpet), Gino Robair (percussion), Kymry Esainko (piano/keyboard), Sascha Jacobsen (bass), Deirdre McClure (conductor), and Alisa Rose (violin).   They performed some of their most memorable scores, including interpretations of the German expressionist classics Metropolis and Nosferatu.  We at CatSynth were not able to attend Metropolis, Fritz Lang’s futurist masterpiece and a personal favorite of mine.  But we were on hand for Nosferatu, the iconic and controversial horror film directed by F. W. Murnau and starring Max Schreck as the eternally creepy Count Orlock.

The history of Nosferatu is as intriguing as the film itself.  It was an unauthorized adaptation from Bram Stoker’s original Dracula, and although the names and some details were changed, in many ways it conforms more closely to both the story and spirit of the original than many later interpretations.  Perhaps too closely, as the Stoker estate successfully sued Murnau’s production company and won a judgment that included an order to destroy all copies of the film.  Fortunately, some prints had already been distributed internationally and have been used for restorations of the original.  The version screened on this occasion was a beautiful restoration from the 2000s that included color tinting for various scenes.  The colors added an even more eerie and otherworldly quality to the film.  It worked particularly well for the Transylvanian scenes and those in and around Orlock’s castle.

The orchestra delivered a highly dynamic and varied performance paired with the images.  There were many sparse sections that fit with the tension of the film, and I particularly liked the spots that featured single lines, such as percussion hits, extended-technique winds, or synthesizer samples.  But the sections where the ensemble came together to deliver punchy and sensuous jazz lines were especially fun.  It added an element of humor and modernism, which is inevitable for a twenty-first-century viewing of a movie from nearly 100 years ago.  The mixture of noises and extended sounds with bits of Eastern European melody and harmony worked especially well for strangely colored Transylvanian scenes.

As a small group, each of the wind players had multiple instruments.  Richard Marriott had a quite an arsenal of flutes and lower brass, and both Beth Custer and Sheldon Brown had bass clarinets in addition to their other instruments.  Gino Robair also had in an impressive array of percussion instruments (though no electronics on this particular occasion).

It was a delightful evening of music and visuals that worked well together – a more concrete film-centered version of the discipline we had a seen a week earlier in Andy Puls’ abstract set at the San Francisco Electronic Music Festival.  And while I’m sorry to have missed Metropolis on this occasion, Nosferatu was probably even more of an “event” in the space of the Castro Theatre.  We look forward to hearing more of Club Foot Orchestra’s scores in the near future.

Last Thursday night at the Outsound New Music Summit, musicians and music lovers came together to celebrate the life and legacy of one of our own, Ralph Carney.  He was a fixture of the Bay Area new-music scene who could be spotted performing in many groups and venues, and he also enjoyed success and notoriety in popular music with Tom Waits, the B-52s, and others.  He is also one of the most infamously colorful characters in the scene.  He passed away suddenly at the end of 2017 in an accident, leaving many both shocked and saddened.  This tribute concert featured a performance by Rubber City, of which Ralph was a member, and a memorial ensemble featuring local musicians who performed his compositions.

In the week leading up the concert, we had the chance to speak with David Slusser of Rubber City and Phillip Greenlief, who arranged Carney’s music for the memorial ensemble.  You can hear from them in these videos.

Rubber City opened the evening with a rendition of Beautiful Ohio, sounding much like they did in the video.  It was a fitting opening as Slusser, Carney, and drummer Chris Ackerman were all Ohio expatriates.  They were joined by bassist Richard Saunders and reedist Sheldon Brown. 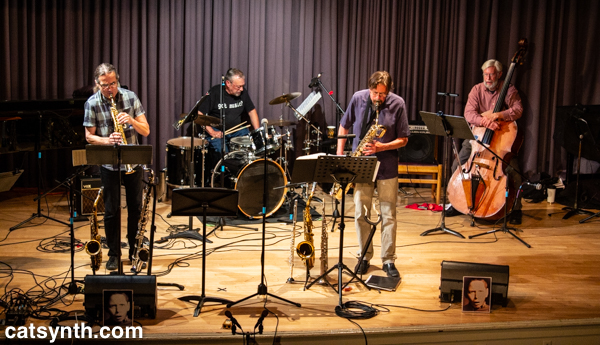 The second piece, a rather bluesy tune, also evoked their Ohio origins and gave Saunders and Brown a chance to shine in solos.  The next was much darker and more atonal/arhythmic in nature but still had a very playful quality to it.  Another featured Slusser and Brown both playing soprano saxophone at the same time, a rare combination!  For the last piece, they set aside the saxophones for bass clarinet and flute. 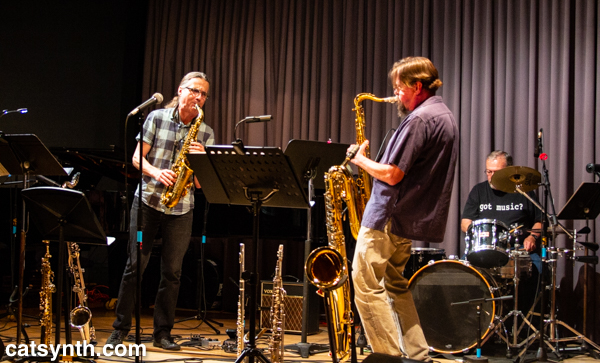 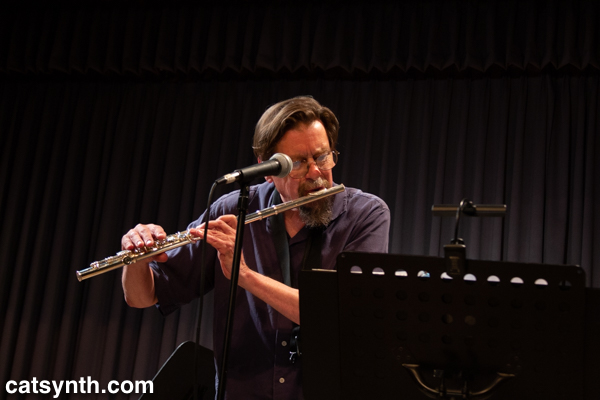 Even during moments of seriousness, there was a lot of fun and energy in the music, which was fitting for the artists on stage as well as the one they were paying tribute to.  It was a tremendous performance overall, and one I am not likely to hear repeated soon.

Slusser, Brown, and Saunders returned in the second set for the memorial “octet” that actually had nine members.  They were joined by Phillip Greenlief and Rent Romus on saxophones, Suki O’kane on drums, Myles Boisen on guitar, and Karina Denike and Michael McIntosh from Carney’s “Serious Jass Project.”  The performance was dominated by the horns in what I dubbed the “wall of saxophone.” 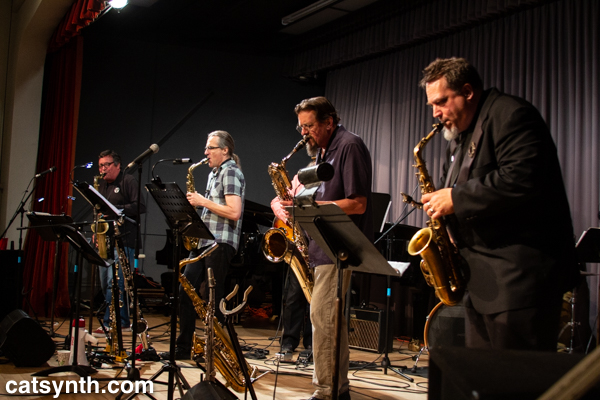 The group began on a somber note with Carney’s Lament for Charleston, written shortly after the massacre at the Emanuel AME Church in Charleston, South Carolina in 2015.  But even this dark piece had exuberance and could not fully contain the energy of the large group.  From there, they continued on a rollicking trip through Carney’s compositions, including his oddball marches and an old-timey song about driving down Sunset Boulevard in Los Angeles that was sung by Greenlief with great effect. 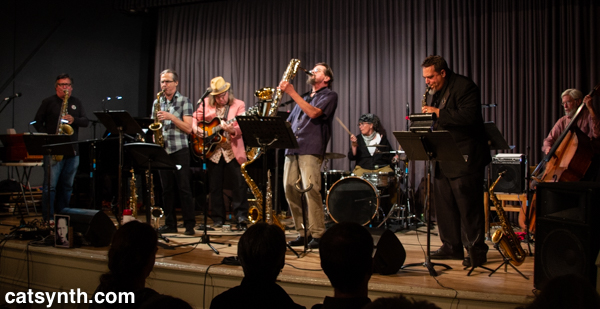 In keeping with Ralph Carney’s wide-ranging musical interests, there were a number of vintage jazz-style and mid-century tunes complete with swaying horn-section choreography.  Karina Denike’s singing and vintage presentation added to the overall effect and classic style of the performance. 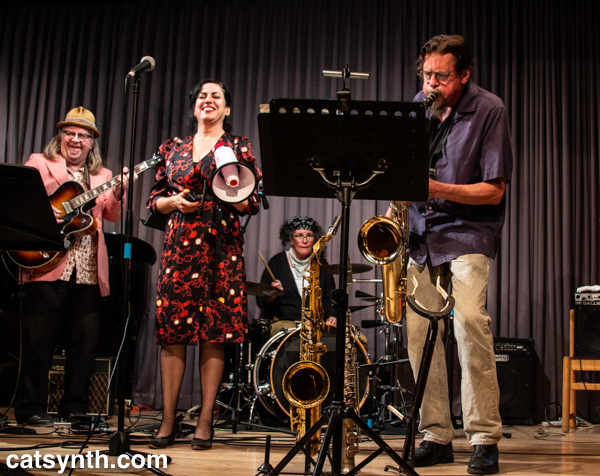 Many of us were simply caught up in the joy of the music and the celebration.  Upon reflection, one realizes how different this was from the typical Outsound set with its references to swing, bebop, and early rock-and-roll.  But there is absolutely nothing wrong with that – I have long professed that “new” and “experimental” musicians should not feature traditional idioms and structures in their music.  This was an unequivocally great show, and the fact that it was on the Outsound stage was all the better.

Both bands played to a full and very appreciative house.  Throughout the evening, on stage and in the audience, people shared their memories of seeing Ralph play or performing with him, and how much he is missed.   I am confident that he would have loved our musical tribute and celebration, though he probably would have expressed his appreciation in an appropriately dry and confounding way.

The third concert of this year’s Outsound New Music Summit was truly a study in contrasts between minimalism and large-ensemble exuberance.

First up was neem, the duo project of Gabby Fluke-Mogul (violin) and Kelley Kipperman (double bass).

This was minimalism in its truest form, starting with the deliberate silence led by Fluke-Mogul before the first note was intoned. The music unfolded in a similarly sparse manner, with plenty of room to observe the details the sounds from both artists’ extended techniques. Although open and spacious, there was also an intimacy in some sections where the two closely followed one another musically, bouncing sounds from one instrument to the other. Whether intentional or not, one could envision the music unfolding in a natural landscape.

By contrast, Sheldon Brown’s Blood of the Air, was large and exuberant, and featured a ten-piece ensemble. In addition to Brown, the group featured Darren Johnston on trumpet, Lorin Benedict on voice, Andrew Joron on theremin, Dave MacNab and John Finkbeiner on guitars, Dan Zemelman on piano, and Vijay Anderson and Alan Hall on drums.

The work centered around “speech melodies” created from readings by the Beat-era poet Philip Lamantia. Each piece began with a recording of Lamantia reading his poetry, and one of the musicians (often Brown himself) responding in a melody that matched the prosody of Lamentia’s speech. The melodies served as points of departure with the ensemble responding with rhythmic vamps, countermelodies, and solos. When I wasn’t watching Brown’s solos or drawn into Lorin Benedict’s frenetic scatting, I found myself captivated by Zemelman’s virtuosic piano playing, both comping and solo. It was both musically and technically impressive. But the group functioned together as a unit, even in a setting that featured a lot of improvisation, and remained tight.

It is interesting to note that despite the musical contrast, both groups were very much focused on listening as a central element. For Blood of the Air, it was listening to the melody of the rhythm and poetry, and then to one other to form the tightness and musical phrasing of the ensemble. In neem, it was also listening and responding to one another, but was also “deep listening” to the individual sounds of the instruments, and especially to the spaces between the sounds. Yes, all good music requires disciplined listening, but sometimes it’s good to step back and take note of it.