It’s been a busy musical time for us at CatSynth. Last week I performed a solo set and collaborative pieces with Amy X Neuburg at the Jewish Community Center in Berkeley. This weekend, I have two more performances, again in Berkeley, as part of Hardly Strictly Personal 2017. It’s a three-day event featuring a wide range of experimental and adventurous music, and benefits EarthJustice and the Homeless Action Center. You can see the full updated schedule, as well as ticket and location info here.

Vacuum Tree Head will be playing tonight, and my fusion/experimental project Census Designated Place (CDP) will be playing on Sunday. I have been busily preparing to make my debut on the Roland VP-03 Vocoder in both bands. Needless to say, between that and the various everyday tasks of an adult in San Francisco, we haven’t had as much opportunity to post here. Regular (?) CatSynth pics and more resume next week.

Another week, another show, or so it has seemed since late May. This one will be a solo set, combining my jazz and funk keyboards with experimental electronics on an analog modular synth; and of course the Theremini. Plus, hopefully, a mix of music and fashion if a recently acquired dress gets back from the dry cleaner in time. If you are in the Bay Area tomorrow, details are below.

KrOB
Subholy priest of the subgenius, KrOB knows that sight and sound are united most when most they are exploding. Heads seem always to blossom in gore, pants burst timely into flame, and each babystroller leaps from its screaming caregiver right on cue. Come get your sweet spot pummeled by the best of the very best, the lowest of the unfathomable.

bran(…)pos
Diehard fans have seen every interior of the bran(…)pos writhe into view via handbuilt multimodal apparatii of self-extrusion. From costumed dissimulations and facial piezoelectrics, to Great Oz-headed video, circuit-bent stiletto, mic swallowing and pharyngeal-cello right between the knees. But until now, the engine at the center of it all has remained hidden: the bubblegum. Keep your eye on the event horizon as the first wad hoves into view at this tape release show for The Bubblegum Forgeries, first in a four volume series.
https://branpos.bandcamp.com/album/the-bubblegum-forgeries-vol-1

Amanda Chaudhary
Modular synthesizers, kids’ toys, and all manner of folk instruments combine to confound and awaken heretofore undiscovered sensibilities of her audiences. Chaudhary is also a photographer, fashion model, designs technology for creativity, and operates the foremost blog on cats and synthesizers, CatSynth.
http://www.amandachaudhary.com/ 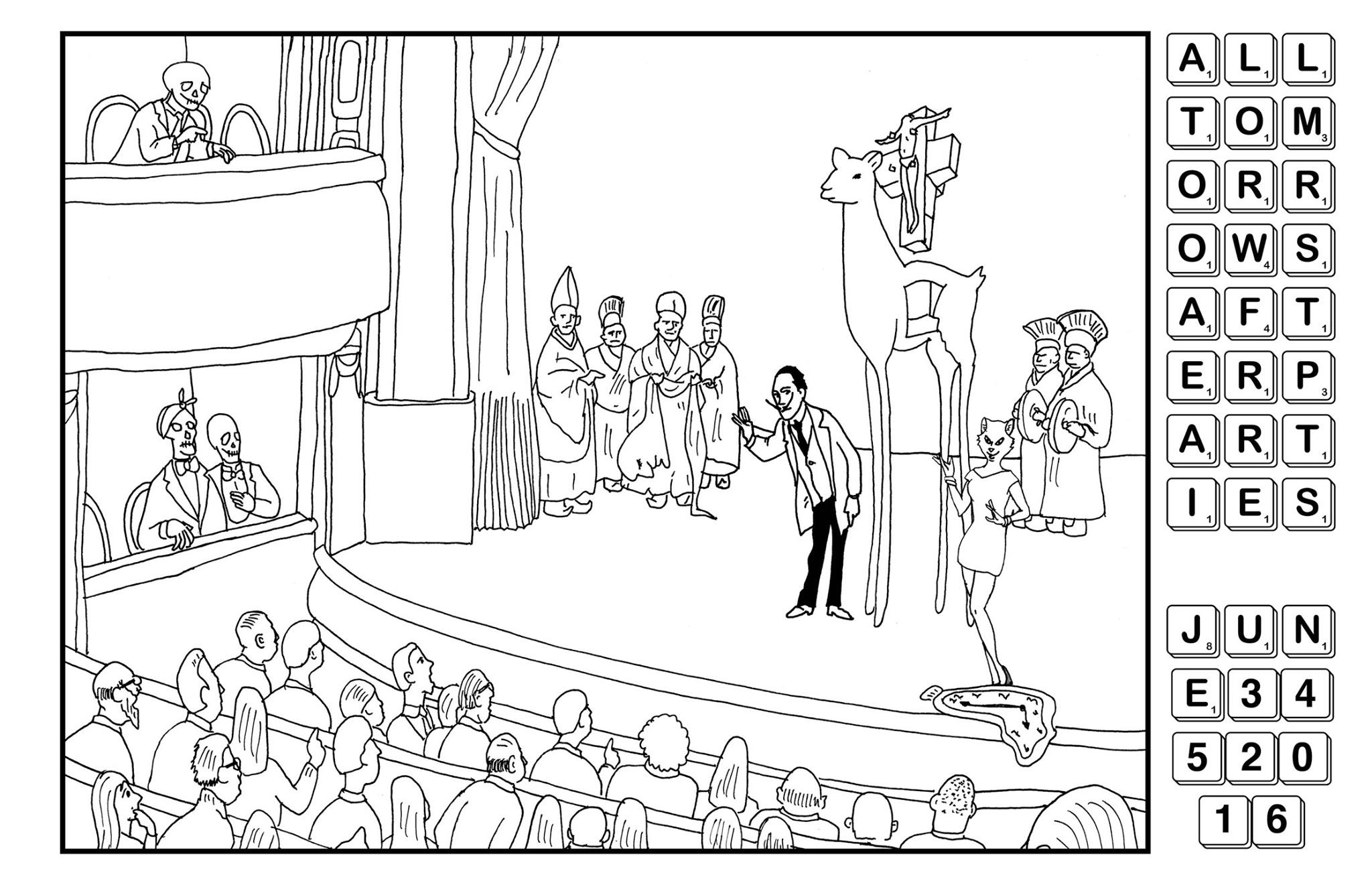 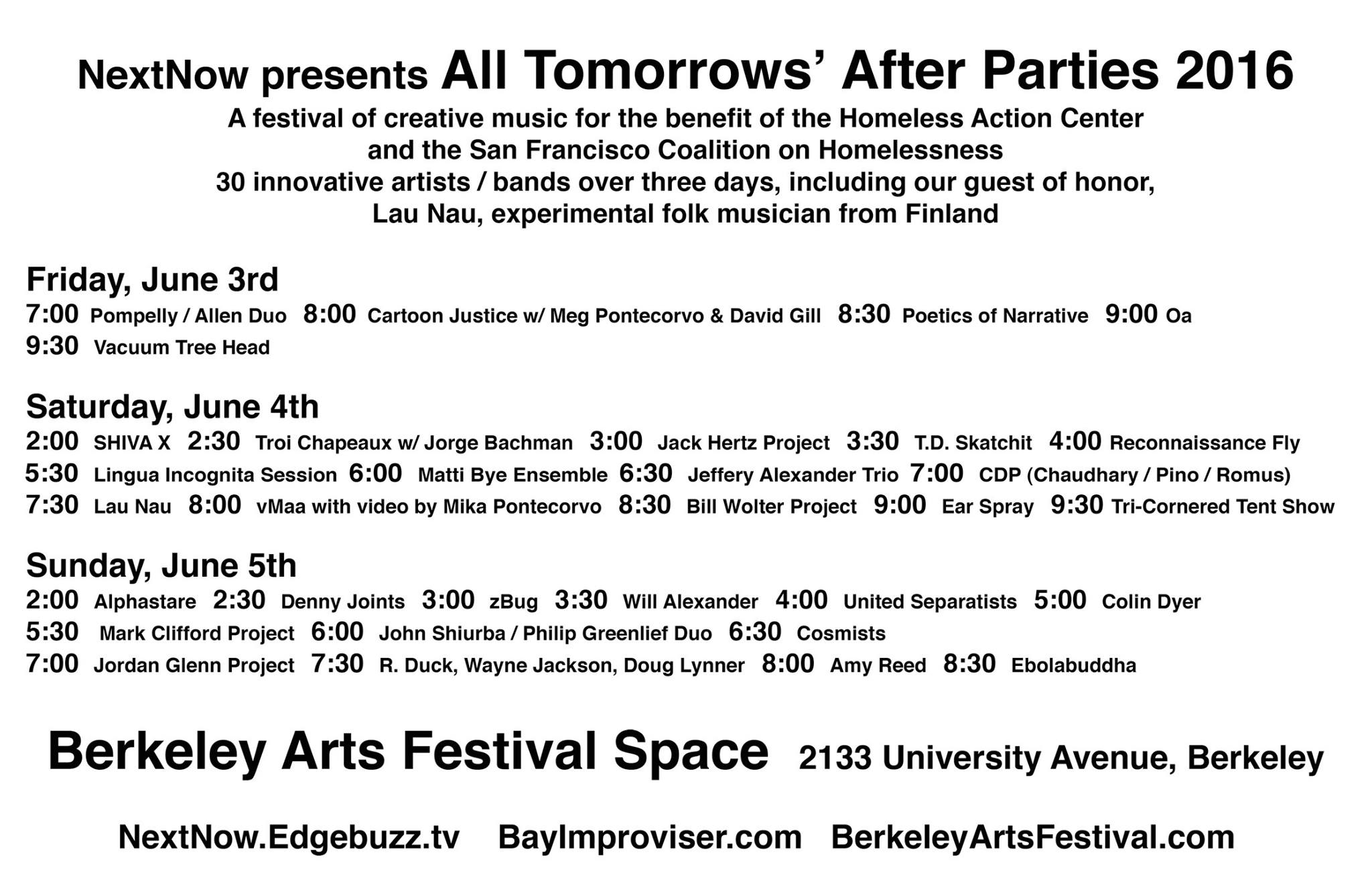 Well, it’s finally here, the big show at Berkeley Arts, Next Now Presents All Tomorrows’ After Parties. I will be performing tonight with Vacuum Tree Head at 9:30PM, and tomorrow with my new CDP Trio at 7:00, preceded by the Lingua Incognita Session at 5PM. If you are in the Bay Area, please join us either or both nights for this great event. Details are below.

PURPOSE
A spring celebration of the creative music community in the Bay Area and beyond. Coming together
to support worthy grass roots non-profit organizations, this Spring our proceeds will benefit the
Homeless Action Center http://homelessactioncenter.org
SF Coalition On Homelessness http://www.cohsf.org

Tania Chen and I take our duo to the Ambient Chaos series tonight at Spetctrum in New York. We had a great show on Tuesday at The Brick Theater, and looking forward to another one tonight. If you are in New York and would like to join us, the full details are below:

Ambient-Chaos is back with it’s May edition.

Acts in the order below.

“Beginning as a free improvisation project in 2009, Hey Exit was restarted in 2015 with a focus on modern pop and electroacoustic composition. Led by Brooklyn’s Brendan Landis, Hey Exit draws on his background in punk, harsh noise, and traditional Japanese music.”
www.heyexit.com

Amanda Chaudhary is a composer and performer specializing in contemporary and electronic music; an artist; and a developer of advanced software for creativity. She performs regularly around the Bay Area and beyond, both solo and with various bands and ensembles. Her solo work involves experimenting with innovative sounds via analog synthesis and custom software with computers and mobile devices for new modes of expressive musical performance. She often incorporates folk and toy instruments from around the world, along with jazz, dance music and other idiomatic styles into her visually captivating performances.
http://www.amandachaudhary.com/

Born in London 1982, Jarvis Earnshaw spent most of his childhood in Japan, and graduated Bunka Gakuin Art School and is a graduate of the Pratt Institute. His musical career as well as his Art career has been recognized worldwide, having solo exhibitions, residencies and performances throughout Europe, Japan, India to New York and LA. His work is often described as a cinematic experience, utilizing guitar, sitar and audio cassette tapes provoking memories of past and beyond, warm and rich as does the noise from a record needle touching an LP; at times violently explosive yet soothing and irresistible. Currently based in Brooklyn, New York, he has been engaged in numerous projects throughout the Art and Music scenes including performances and collaborations with: Walter Steding, Kenny Scharf, Amazing Amy the contortionist, Rumi Missabu of the Cockettes amongst many others, and currently also plays bass in the punk band Question. His photos have been featured in Asahi Camera Magazine, has had a solo exhibition at the New York Public Library Thompkin Sq. branch and will be performing at the Bruno Walter Auditorium/Lincoln Center on April 21st 2016 in celebration for the inauguration of the “Rumi Missabu Papers” to the NYPL.
jarvisearnshaw.com
http://toqsyold.blogspot.com/

Jenn is a sound and experiential media artist based in Brooklyn. Her interests lie in modes of heightening emotional, social and sensory awareness through ambient soundscapes, multichannel composition, vocal experimentation, public sound intervention, and collaborations with dancers and filmmakers. She has installed and performed at venues such as Harvestworks, the MoMA PS1 Printshop, the New York Transit Museum, Reverse Gallery, Open Source Gallery, Club 157, for the Deep Listening Conference’s Cistern Dream Session, Brown’s OPENSIGNAL Festival, the Gallatin Arts Festival, amongst in everyday spaces such as the park archways and tunnels, garbage cans, street vents and stairwells.

This is the piece I will be exhibiting at the upcoming 200 Yards show in San Francisco this Friday.