Ringo plays a minimalist tone cloud on a Korg Triton Synthesizer. He also has a Waldorf Blofeld if he wants to add another sonic layer to his performance.

From our friend Damien Olson in New York. You can see a bit of a concert we did together in Brooklyn last year in this video.

It is that time of year when I invariably return home to New York for a visit. And this time it began in dramatic fashion with a return to the Ambient Chaos music series at Spectrum. Perhaps not quite a return, as Spectrum as since moved to a new location on the waterfront in Brooklyn. But it was still the same concept, hosted by Robert L. Pepper of Pas Musique, with a variety of local and visiting musicians performing adventurous electronic music.

The unfolded in with sparse but structured piano set against electronic sounds evoking metal machinery. Both elements started out slow and quiet with lots of empty space but increasingly got more dense and urgent. After a brief interlude, a new phase of the music began with vocals set against fast piano runs. The vocals began very expressive and plaintive but soon morphed into a complex electronic sound under vocal control. Underneath this, an incessant thudding drum emerged.

Next up was The Tony Curtis Experience, a trio led by Damien Olsen on keyboard and electronics, Jeremy Slater on guitar and electronics, and Neb Ula the Velvet Queen on theremin – specifically, a Moog Theremini with which we at CatSynth are quite familiar.

Their performance mixed long tones on theremin, slide guitar + electronics, and synthesizer pads with loud percussive moments. The early portion of the set evoked some fantastic futuristic nightclub with crystalline hits and pedal tones. But Olsen’s keyboard brought it back to the present and near past with melodic and harmonic playing reminiscent of mid-20th century cabaret as well as synth-pop of the 1980s. The theremin, acting as both sound source and controller, provided antiphonal counter-subjects to these familiar sounds; and the guitar drones glued everything together. It was a fun set, especially with Olsen’s playful performance and his use of familiar idioms.

Then it was my turn to take the stage. And I compacted the setup for travel, with the Arturia MicroFreak, laptop, Novation LaunchPad Pro, tiny modular with Qu-bit Prism and Strymon Magneto, a new handmade touch synthesizer, and Crank Sturgeon Pocket Gamelan.

I planned a slimmed-down version of my solo set from the Compton’s Cafeteria Series show in August, including White Wine and an evolving improvisation over an 11/8 groove.

Overall, the set went well – a highly dynamic performance with a lot of melodic elements, jazz riffs, and noise solos layered over rhythms. A few items misfired, but all recoverable. I particularly enjoyed the sections of melody and jazz improvisation where I floated back to the sounds of the 1970s; it seemed the audience appreciated that, too. Finally, it was also just fun to be playing in New York again after an extended break. Watching the video of the set (which will be shared soon as an episode of CatSynth TV), I particularly thought this noisier and more “electronic” version of the 2019 set worked well in Spectrum and especially with the every-changing “spectrum” of light from yellow to violet and everything in between.

The final set of the evening featured 4 Airports, a duo of guitarist Craig Chin and synthesist Nathan Yeager. Chin performed with guitar and an array of pedals, while Yeager brought a large synthesizer setup complete with a modular system.

Perhaps more than the preceding sets, they lived up to the “ambient” in Ambient Chaos. Chin’s guitar gestures were subtle as he guided the sound into the electronic arena of the pedals, and Yeager’s synthesizer sounds were complex but still lending themselves to long ideas even when the tones and timbres moved between quick and slow. From the chaotic undertones and singular and dreamy landscape emerged, with occasional ebbs and flows and punctuations.

Overall, it was a wonderful night of music in this corner of the Brooklyn waterfront, with an intimate crowd in the cavernous but cozy space. I would also be remiss if I did not give a shout out to Sofy Yuditskaya for her video projections that reflected the music on stage. I certainly hope the gap until my next performance here is much shorter than the last.

[Full video coming soon. Please subscribe to CatSynth TV to be noticed when it is available.] 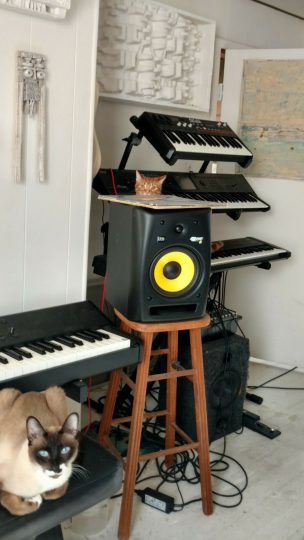 Our friend Damien Olsen back in Brooklyn presents “Cats in the Studio”, featuring two of his cats and sundry keyboards. I had the pleasure to meet these felines during my most recent trip back to New York 😺