Ruins of the 1968 Worlds Fair in Flushing Meaders Corona Park in Queens, New York.
Our recent trek to see all of Ai Weiwei’s installations brought us here for the first time in a long time. You can read and see more in our review our video.

A rare vacant lot with graffiti and older facades amidst the booming construction in Long Island City, Queens, New York. How long will it last? 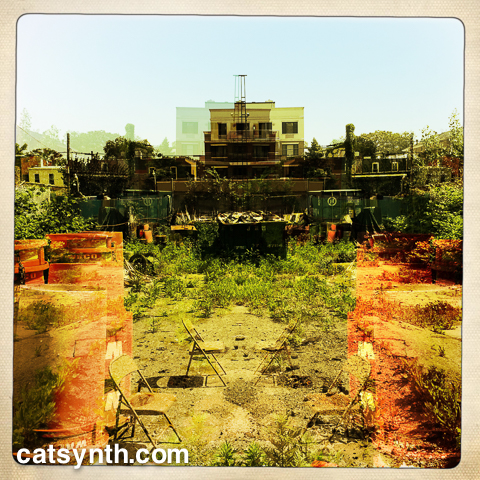 Returning to San Francisco from New York often involves a highway trip to JFK Airport, and there is one spot along the Van Wyck Expressway (I-678) that is almost always guaranteed to come to standstill, the Kew Gardens Interchange:

The Van Wyck Expressway runs vertically in this picture, from the center top to the center bottom.  The Grand Central Parkway runs from the upper left to the center right.  The Jackie Robinson Parkway runs from the lower left to the interchange where it ends at the Grand Central Parkway.  The Union Turnpike runs along either side of the parkway.  Finally, the main surface thoroughfare through Queens, Queens Boulevard (NY 25) is in the lower left corner.

One doesn’t really see the complexity of this interchange from the road, just a series of exits in quick succession (or not so quick when one is barely moving), and in fact that it seems like the Van Wyck is merging into another, narrower road at the end, before the reassuring signs that one is still on the right road to the airport. It often seems like many of the larger highways in New York are really stitched together from older, smaller, highways.

This interchange was featured on Empire State Roads, with more information and images.

I have been on the parkways as well of course.  The Jackie Robinson Parkway winds its way narrowly towards Brookyln through parks and near several cemeteries.  I have relatives who reside in at least one of them.