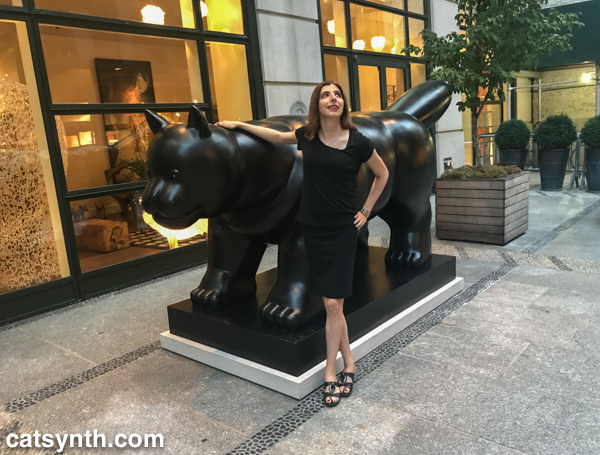 A rare self-portrait for Wordless Wednesday. This was taken last September in the SoHo district of lower Manhattan when we espied this large sculpture of a cat.

A photo captured in SoHo, New York City, framing a metal sculpture and black-cat painting on a wall.

During my visit to New York, I had the opportunity to check out a few events from the Performa 11 biennial. I had a great experience, too years ago, and wanted to check out the final weekend. My time this year was quite limited, but I did have a chance to attend a few events.

The artistic highlight of my brief visit was a piece by Mika Rottenberg and Jon Kessler called SEVEN, which took place at Nicole Klagbrun Project in Chelsea. It was described as “a chakra sauna channeling chromatic body fluids from New York to Cradle of Humankind in Africa.” There are seven chakras, which correspond to areas of the bodies and states of being in Hindu and Buddhist traditions (you can look up tons of information on this if you’re curious), with an addition of colors of the spectrum in some recent practices, particularly in Western societies. The installation consisted of a full scale urban spa, with exercise area, working sauna and a lab with a bizarre combination of equipment and a technician who appeared to be running the show:

At the same time, the installation featured a video from an arid landscape in Africa. It is the combination of both the live installation and the video that becomes interesting. In the video, a succession of people in the African landscape extract cylindrical cores of mud from the parched ground. These are given to a local man in a small hut, which he then places into a bizarre looking contraption. When he turns it on, the core suddenly appears in the local lab in a similar looking piece of equipment. These are then placed in the sauna. Meanwhile, in New York, people take turns on an exercise bike, which both powers the sauna and helps the participant work up a sweat as they take turns moving from the bike to the sauna. The participants are assigned colors from the chakras/spectrum in succession, and their perspiration from the sauna generates a vial of “chakra juice” of that color, which is then collected.

This process repeats slowly for each of chakras, with the participants in Africa bringing the mud to the machine and the local participants generating the colored vials in the sauna. The synchronization between the installation, live performance and video is very well done, and does give the illusion that these events are happening together in real time through some process we don’t quite understand.

When all seven chakras are filled, the set is then sent back through the device to its counterpart in Africa in the video. At this point, the video completely takes over and we see the purpose of this ritual. If anything, the conclusion was perhaps the least convincing part of the piece, as it seemed a bit forced compared to the surrealism and illusion created by the synchronizing the video and live performance. But overall, it was a strong piece and I’m glad I made the trip over to the west side to see it.

Back at the Performa Hub in SOHO, I spent some time at the brew pub, where a variety of beers from local homebrewers were on tap.

I particularly liked a couple of spicy brews featuring chili, but there were also some great seasonal beers with pumpkin and cinnamon. In addition to the beer itself, it was an opportunity to interact with artists, the brewers and other visitors. Attending art events in New York can sometimes be a lonely affair, so it was a nice change of pace. In my haste to get to the next event, I misplaced my list of the beers (along with my copy of the Occupied Wall Street Journal I picked up earlier in Zuccotti Park), so I don’t have exact info to share with readers. If I find something online, I will update.

Overall, I did not get to see as much as I did in 2009, and it did not have the same abstract/modernist/future-retro vibe that it did two years ago, but overall it was a good experience and a good start to my week in New York.