The observation deck on the High Line above 10th Avenue in New York.

This was one of a series of Hipstamatic images taken on the High Line late last year. I assembled together into this silent video.

Classic Mark di Suvero sculpture in a lot along 11th Avenue in the Chelsea neighborhood of New York.

The Art of Paper is a multi-artist exhibition currently on display Sundaram Tagore Gallery at their Chelsea location.  The term “works on paper” often refers to drawing and print, but the medium and can be used in so many more ways.  Each of the artists in the show uses paper in a very different way, showcasing its breadth and versatility as a raw material for art.

Korean artist Chun Kwang Young creates fantastic three-dimensional sculptures from mulberry paper.  This thin and delicate paper is prized as an artistic but also has mundane uses as wrappers.  Chun sources his paper from old books and wraps them into tight triangular forms that he then assembles into beautiful and complex forms he calls Aggregations.

Some are flat and wall-mounted while others are freestanding.  But in all cases, they are three-dimensional full of complex depth and texture.

The jagged triangular elements seem sharp, even a bit dangerous up close.  But at the same time, they seem fragile, like delicate crystals that could fall apart among touch.  When viewing closer, they seem soft, especially as the details of the paper come into view, including the original printed text from the source material.  There is something almost science-fiction-y and other-worldly about the result that I find captivating.

Chun has a simultaneous solo exhibition from his Aggregations at the Brooklyn Museum, which we will be reviewing in a separate article.

The work of Anila Quayyum Agha also uses paper as a basis for sculpture with a very different set of styles, techniques, and sensibilities.  She is best known for her works featuring paper laser-cut into large intricate forms.  Many of the paper cuts are assembled into cubes placed in immersive spaces with light.

Being in the space of this piece and viewing it from all angles was a captivating experience.  It doesn’t seem like paper, but rather intricately carved stone or metal.  S of the same principles of light and the spaces in between the material are at play in Agha’s two-dimensional works. The designs of Agha’s laser-cuts are reminiscent of the intricate designs found in Islamic art and architecture, such as the mosques of her native Pakistan.  Growing up as a woman there, she often found herself excluded from such spaces, and this informs her art today.

In contrast to Agha’s highly intricate designs, Miya Ando’s work is more subtle and spare.  She is known for more abstract work in metal, but she brings that work to paper in her “moonlight” pieces for this show.

Paper is often white, but it can be many different whites and shades in between those gradations.  The subtle changes give the round form a very natural feel in contrast to the stark white background.

There are several more artists in this show, more than we at CatSynth are able to cover in this article.  For more information, please visit the gallery’s website.  They are located at 547 West 27th Street, and the exhibition will be on display through December 15, 2018.

Building on the High Line in New York by the late great Zaha Hadid. 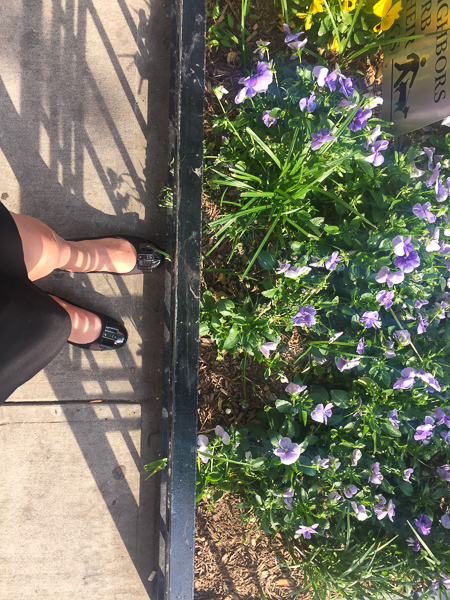 Since my last visit to New York, the Whitney Museum opened its new building in the Chelsea neighborhood of Manhattan, and so it was of course a high-priority stop on this visit.

The first work of art on encounters is the building itself. The overall style neither attempts to mimic the warehouses of the Meatpacking District nor projects the dissonance of some of the other intriguing buildings along the High Line. But it does open up to the neighborhood and the city, making that part of the show along with the formal art.

The main exhibition was a massive retrospective of works by Frank Stella which took up the entire 5th floor of the museum and featured his iconic large and colorful paintings as well as more recent works that veered towards the sculptural. One of the major themes is how over his long career he has shifted his focus and come up with new ways of working in the medium he still refers to as “painting.”

His most recognizable works are the large-scale colorful cutout paintings. The earlier examples contain elements of abstract expressionism and the emerging minimalism, but then modified by cutting out the shapes to make irregular canvases, freeing panting from being simply “colors spread onto a rectangular surface”. Nonetheless, my favorite examples of this phase are still geometric and stark.

From straight lines, we move to curves, which further modify the boundaries of a painting. And then came the radical step of taking a painting outside of the flat plane by cutting, bending, and layering pieces.

While the placement and combinations of shapes may be complex, the shapes themselves remain simple and the whole composition abstract. I found this phase of Stella’s work to achieve its most refined form in La penna di hu.

It seems natural to ask whether such works are paintings or sculptures. Stella himself comes down squarely on the side of viewing them as paintings. This is true even for his most recent series of work that feature large metal constructions without color.

Stella has also embraced technology throughout his career including new materials and machines. Most recently that includes 3D printing.

It was great to see both his most famous paintings alongside the more surprising elements of his constantly evolving work in this large exhibition. As Stella is still alive, there may be more to come.

The top floor of the museum features a retrospective of works by Archibald Motley. Motley was a prolific and influential painter who came to prominence in the first half of the 20th century. The exhibition focuses on his works portraying African Americans in serious portraits and lively cultural scenes from the Jazz Age and Harlem Renaissance in the 1920s and 1930s. While the portraits are detailed and striking, it was his scenes of colorful musical spaces that most resonated with me.

Motley was well known in his time, but faded later compared to other painters of American life and scenes (think Edward Hopper). Because his work depicts an American community often overlooked and his style is more modern and pushing away from realism, it is great to see him getting reintroduced through exhibitions such as this.

The galleries featuring pieces from the permanent collection were also “new” in the new space. Among the themes that permeates the museum’s collection are scenes of the city and industry. There is Joseph Stella’s Brooklyn Bridge (a poster of which hangs at CatSynth HQ) but also John Marin’s less-well known Region of Brooklyn Bridge Fantasy with a very different take on the same subject.

In terms of industrial imagery, among the strongest were Kay Sage’s surrealist piece and Elsie Driggs’ Pittsburgh. Both pieces, at least to me, have a very optimistic view of the city and progress even if others of our current time would see them as bleak.

It’s also worth noting that some of the strongest images of these themes were done by women, something that inspires me in my own work into this subject.

The 6th floor featured works from the collection of Thea Westreich Wagner and Ethan Wagner, some of which will be come part of the Whitney’s permanent collection and some of which will go to the Centre Pompidou. It focuses American and international art from the 1960s to the present, and demonstrates the wide variety of media and concepts employed during this period. Minimalist works abound, such as Sean Paul’s series featuring arrangements of black shapes on a white background with implied complexity.

There are also many works featuring technology. Some are the obligatory works with the light (that I do quite enjoy), but one of the more confounding pieces was by Aaron Flint Jamison. It featured two wooden boxes with multiple computers and a shelf of printed sheets. Were the computers the art, or were they just functional elements to support the concept?

[Aaron Flint Jamison. Half Matrix Vessel (part of “Manifold to Half Matrix” installation), 2013]

There was of course more traditional modernist painting, such as Charline von Heyl’s piece Boogey.

Overall, this was a great visit and a chance to see a new museum in a favorite neighborhood of mine. One question that I had was what would be the fate of the old midtown Brutalist building that housed the museum for decades. Fortunately, it appears that it will survive, and the Metropolitan Museum of Art plans to use it for some special exhibitions. I hope to be able to see one in the future.

[Images without “catsynth.com” watermark courtesy of the Whitney Museum of American Art.]