The 19th annual San Francisco Electronic Music Festival concluded yesterday, and we at CatSynth were on hand for the final concert. There were three sets, each showcasing different currents within electronic music, but they all shared a minimalist approach to their musical expression and presentation.

The evening opened with a set by Andy Puls, a composer, performer and designer of audio/visual instruments based out of Richmond, California. We had seen one of his latest inventions, the Melody Oracle, at Outsound’s Touch the Gear (you can see him demonstrating the instrument in our video from the event). For this concert, he brought the Melody Oracle into full force with additional sound and visuals that filled the stage with every changing light and sound. 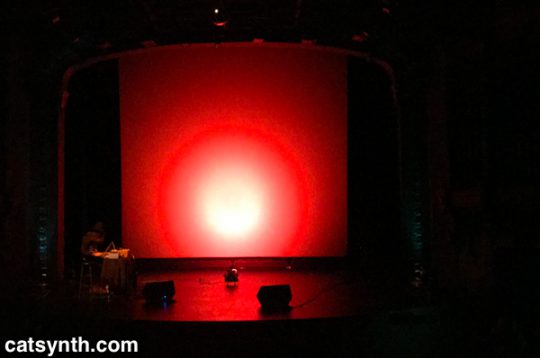 The performance started off very sparse and minimal, with simple tones corresponding to lights. Combining tones resulted in combining lights and the creation of colors from the original RGB sources. As the music grew increasingly complex, the light alternated between the solid colors and moving patterns. 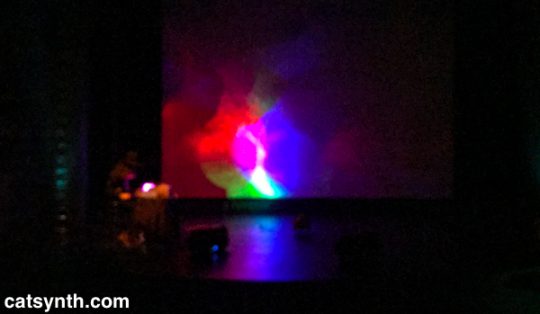 I liked the sound and light truly seemed to go together, separate lines in a single musical phrase, and a glimpse of what music would be if it was done with light rather than sound.

OMMO, the duo of Julie Moon and Adria Otte brought an entirely different sound and presence to the stage. 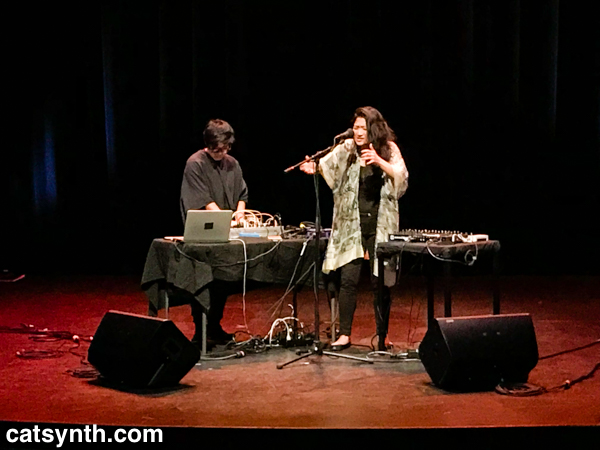 The performance explored the “complexities and histories of the Korean diaspora and their places within it.” And indeed, words and music moved freely back and forth between traditional and abstract sounds and Korean and English words. Moon’s voice was powerful and evocative, and quite versatile in range and she moved through these different ideas. The processing on her voice, including delays and more complex effects, was crisp and sounded like an extension of her presence. Otte performed on laptop and analog electronics, delivering a solid foundation and complex interplay. A truly dynamic and captivating performance.

The final set featured a solo performance Paris-based Kassel Jaeger, who recently became director of the prestigious Groupe de Recherches Musicales (GRM). Sitting behind a table on a darkened stage, with a laptop, guitar and additional electronics, he brought forth an eerie soundscape. 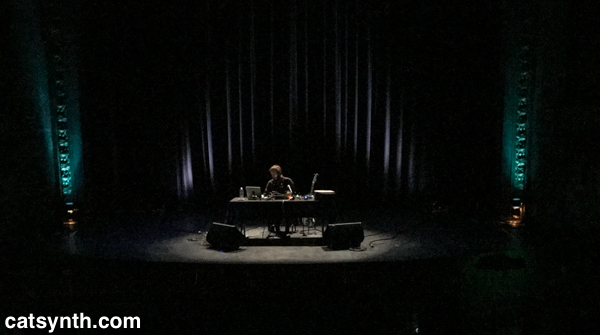 The music featured drone sounds, with bits of recognizable recorded material, as well as chords and sharp accents. The musique concrète influence was abundant but also subtle at times as any source material was often submerged in complex pads and clouds over which Jaeger performed improvisations.

It is sometimes difficult to describe these performances in words, though we at CatSynth try our best to do so. Fortunately, our friends at SFEMF shared some clips of each set in this Instagram post.

The final night of the 2018 SFEMF: Andy Puls @a_magic_pulsewave, @ommomusic and @kasseljaeger Thanks for tuning in and see you next year for the 20th anniversary of the festival. 👋🏼👋🏻👋👋🏾👋🏿 #electronicmusic #experimentalmusic

Much was also made of the fact that this was the 19th year of the festival. That is quite an achievement! And we look forward to what they bring forth for the 20th next year…

The 12th Annual Outsound Music Summit began this past Sunday, opening as always with the Touch the Gear Expo. Musicians and sound artists from the Bay Area and beyond were on hand with their musical devices and inventions for the public to observe and try out. I participated this year with two technological extremes: soft synths on an iPad, and a full two rows of Eurorack format analog modules.

Both offerings were quite popular, eliciting curiosity from visitors of all ages.

There were quite a few analog synthesizers on hand, including a vintage Serge modular courtesy of Synthesizerman (aka Doug Linner).

One of the more intriguing analog synths I encountered was this creation by Andy Puls.

The circular pattern represents a step sequencer controlling an internal sound generator. Conductive pegs can be moved around on the bars to change pitches and other parameters. There are also knobs as well. The overall geometry, control design and lights made this a visually appealing instrument.

Fernando Lopez-Lezcano demonstrated his elaborate homemade analog synthesizer. I have had the privilege of hearing him play it in a formal performance.

Matt Davignon demonstrated his devices for working with fixed-media sources, a bit of a preview of what we can expect for Friday night’s PMOCOTAT performance.

Acoustic creations, in particular sounds from natural sources, were a common theme this year as well. Cheryl Leonard demonstrated her expertly tuned instruments made from stones, bones, shells and wood gathered at the extremes of the earth. She also demonstrated her virtuosity with using these elements together, such as generating rhythms from a series of bones passed over the shells.

David Samas was also on hand with his musical creations from natural sources found here in northern California.

Missing from the picture above is his tuned aluminum rod, from which one can get quite a powerful sound with a well-rosined hand. I had the opportunity to try it out myself.

Bryan Day presented his instruments made from found objects, including the tape measures featured prominently in the image below. Other sources included springs and metal rods. His creations are quite ergonomic and easily to play, putting unusual sources into compact and intuitive arrangements.

Horaflora combined acoustics and small electronics in a couple of lively offerings, including drum heads excited by magnets. I heard him play this in a program several months ago.

Horaflora also demonstrated exciting natural acoustic elements atop a subwoofer connected to an iPhone synth. You can see and hear a bit of my attempting to demonstrate these elements together with him in the following video:

David Molina (aka “Transient”) also blended acoustic and electronic ideas. He had a variety of small instruments and sound sources on hand, which he used to generate source material for complex loops and textures controlled in real time via Albeton live.

In his own words, this was only “about half of what he will be using in his performance on Friday.”

Tom Nunn, a prolific inventor whom I interviewed in 2012, was once again presenting his creations. This time it was an exceptionally colorful set of his Skatchboxes.

There were others presenting as well, and unfortunately, I did not have time to see everyone and also attend to me own station. But I hope to see more of all the participants in more musical settings.

The Outsound Music Summit continues on Wednesday night with the first of the formal concerts, you can see a full schedule here. And of course, you can always follow along with @catsynth on Twitter if you can’t attend in person.