While I thoroughly enjoyed every night of this year’s Outsound New Music Summit, last Friday was special because I was on stage with my own band CDP.  We shared the bill with Dire Wolves for a night of contrasting retro styles within the context of new and experimental music.

I often get asked what “CDP” stands for.  And while it does stand on its own as a name, it does come from the initials of the original three members: Chaudhary, Djll, Pino.  That’s me on keyboard and vocoder, Tom Djll (synthesizers), and Mark Pino (drums).  Joshua Marshall joined the band in 2017, bringing his technical chops and versatility on tenor and soprano saxophone.  As a road-and-map geek, it also stands for “Census Designated Place”. 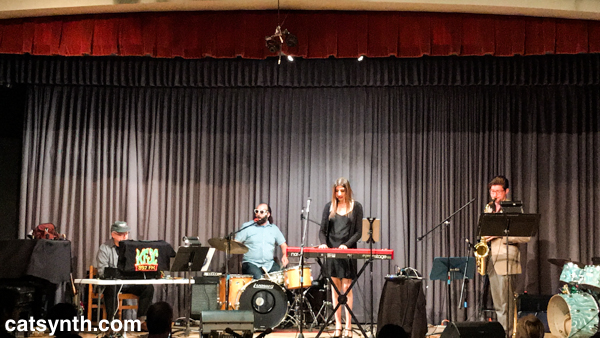 We had five tunes for this concert.  Three of them were from the series I call “the jingles”, including White Wine, North Berkeley BART, and our newest song, Rambutan (it’s a fruit from Southeast Asia).  Marlon Brando and Konflict Mensch rounded out the set.  Each featured a melodic and harmonic head followed by open improvisation – no fixed solos, even listens to one another and comes in and out.  Our style is a blend of funk, fusion and experimental music reminiscent of Herbie Hancock’s Mwandishi and Head Hunters bands or Soft Machine 5 & 6, with a bit of 1970s Frank Zappa / George Duke mixed in.  The music is a joy to play and I’m so glad to be able to be on a stage playing it. 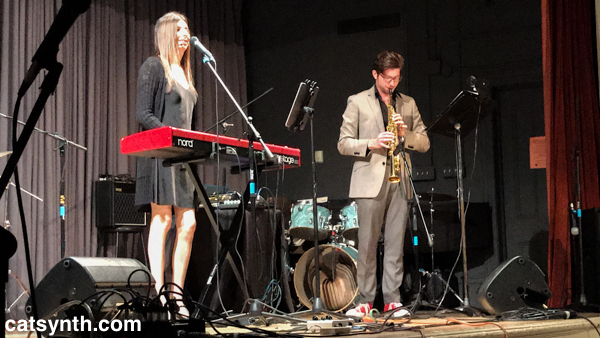 We got off to a somewhat shaky start with White Wine, but we settled down quickly as we headed into the improvisation section.  From that point on, things only got better with Marlon Brando and North Berkeley BART (which is always a local crowd pleaser).  Rambutan was a lot of fun, including the funky 7/4 jam and the call-and-response chant with the audience.  Mark held up the metric foundation, working with both me and Tom who took turns on the bass roll.  Tom also got some great sounds in his solos, as did Josh who moved easily between growls and mellifluous melodic runs. 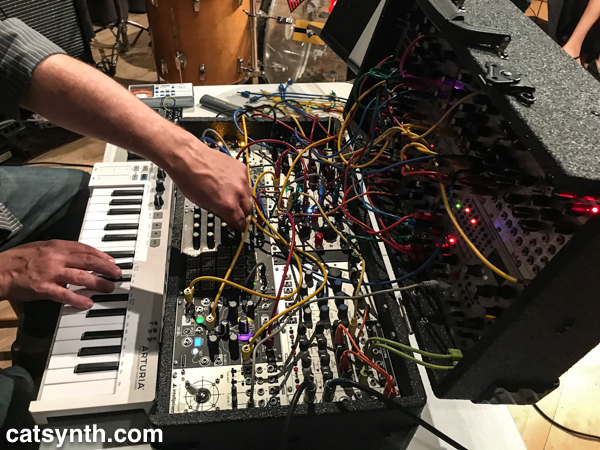 The vocoder, a Roland VP-03, held up pretty well – in some ways, I felt the scatting went even better than the lyrics – though there is still work to do keeping the voice intelligible in the context of the full band.   I was exhausted and satisfied after the set, and look forward to doing more with our band.

You can read Mark Pino’s perspective on the set on his blog.

For the second set, Dire Wolves brought a completely different energy to the stage.  Where CDP was exuberant and even frenetic at times, Dire Wolves welcomed the audience with a mellow and inviting psychedelic sound. 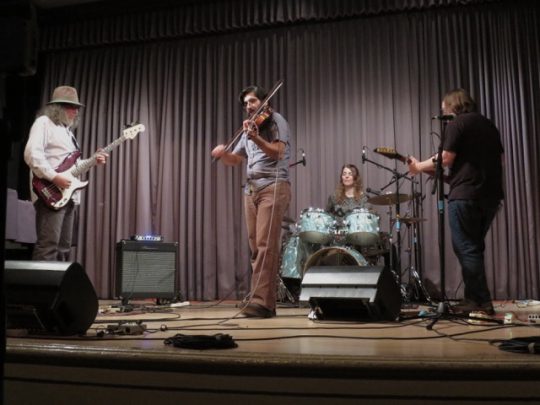 There was a sparseness to the music, with Jeffrey Alexander (guitar + winds), Sheila Bosco (drums), Brian Lucas (bass) and Arjun Mendiratta (violin) each staking claim to a distinct orchestral space within the soundscape.  Alexander and Mendiratta had lines that melted seamlessly from one to the next; Brian Lucas’ bass was sometimes melodic.  Bosco’s drums provided a solid foundation, but she also contributed voice and other sounds to the mix. 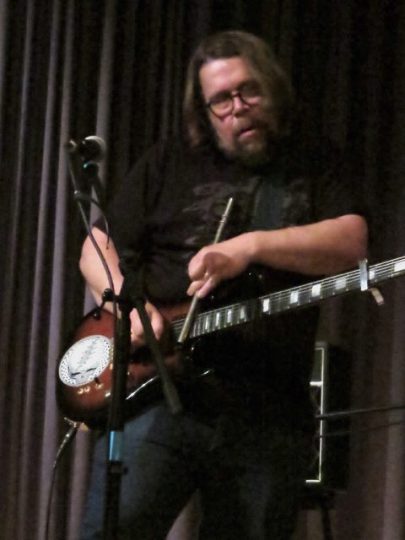 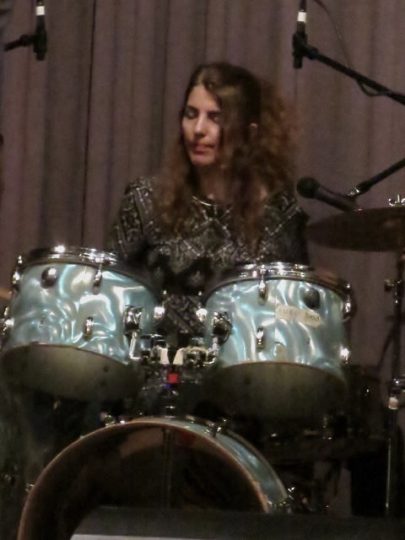 My mind was still processing the set we had just played, but the trance-like qualities of Dire Wolves provided a space for a soft landing and to return to a bit of balance.  Sadly, it seems this was the band’s last performance for a while, at least with the current lineup.  But I look forward to hearing more from each of these musicians in their other projects.

Both groups played to a decently sized and very appreciative audience – not the capacity crowds of the previous or following nights, but respectable.  And I got quite a bit of positive feedback from audience members after our set.  We still have one more night of the summit to cover, and then it’s onward to future events.

We continue with our temporally reversed coverage of the Hardly Strictly Personal 2017 Festival that took place at the Finnish Kaleva Hall in Berkeley in March. Today we look at day 2.

Oa’s music involves the processing and manipulation of vocal sounds, often based on Hugh Behm-Steinberg’s words and voice. But on this occasion they featured vocal samples of Captain Beefheart. It was an appropriate twist given that HSP2017 is officially billed as “A Celebration of Post-Beefheart Art.”

Next up was Skullcrusher, a solo project of Phillip Everett.

Skullcrusher featured a variety of sonic implements, some processed and amplified, along with an Arturia Microbrute synthesizer. There were harsh noise elements throughout the set, but also snippets of melodic and harmonic material mixed in. Interestingly, the set elided into the next one featuring Joshua Allen on saxophone, with the two playing together in a frenetic improvisation before Skullcrusher faded out and Allen continued on his own as a solo set.

There were several solo sets featuring wind instrumentalists on this evening. Joshua Allen was followed by Jaroba, who played an exceptionally inspired set with bass clarinet and percussion.

Jaroba coaxed very subtle and intricate sounds from his instruments, but with dramatic moments as well. The dynamic range, phrasing and narrative structure made it very musical indeed. His sounds managed to remain punctuated even in the complex and bizarre acoustics of the Finnish Hall. The music also had a emotional and spiritual dimension to it, which added to the listening experience. It was a joy to hear, and we congratulated him after the set.

Next up was Dire Wolves, featuring Sheila Bosco on drums, Brian Lucas on bass, Arjun Mendiratta on violin, and Kelly Ann Nelson on voice and electronics. There was also video projection along with the music, which mixes “space music”, folk, and other elements into an undulating flow of rhythms and harmonies.

Dire Wolves was followed by Arrington de Dionyso on saxophones, part of his epic “This Saxophone Kills Fascists” tour.

There is nothing subtle about the message, or the music. de Dionyso’s playing is loud, strong, frenetic, no-holds-barred. But he also had some soft moments that broke things up. While in large part a solo set, he also performed as a duo with drums, and a trio that included Rent Romus on saxophone.

The final set of the evening brought Voi! Maa! to the stage. This group features event-organizer Mika Pontecorvo on flute, guitar, and laptop manipulating sounds from other members of the band, which included Kersti Abrams on winds, Mark Pino on drums, Eli Pontecorvo on bass, Adrienne Pontecorvo on cello, and Jaroba sitting in on bass clarinet.

Thet music unfolded with Mika cuing the other members of the group in various configurations, with loud hits, noise pads, but also some more subtle sounds, particular from Adrienne Pontecovero, Abrams and Jaroba. In the middle of the set, the music quieted down as Meg Pontecorvo read selections from her science-fiction writings. Overall it was a fitting close to the evening, especially as it brought the folks whose hard work made this event possible onto the stage.

There is one more day to present in this backwards progression: Day 1. We will share that in a separate article soon.