A moody photo of a cat and human playing an Arturia MiniBrute 2 analog synthesizer. From darioduartenunez on Instagram.

A beautiful black-and-white photo featuring Simba atop a Roland JUNO Gi synthesizer. From anas_ayasso on Instagram.

The JUNO Gi is a recent addition to the JUNO line, a bit different from the original 6/60/106 line. It is a digital synthesizer that can create a wide range of sounds, and it has its own built-in 8-track digital recorder.

I almost feel like I’m walking on that facade.

Our interests in cats, synthesizers and highways come together in this photo featuring Sam Sam checking out my US 101 shield, which I was using as a backdrop for a livestream concert on Saturday.

Posing with my friend and collaborator Serena Toxicat at the Outsound benefit dinner a couple of weeks ago. Although about the same height, size, and silhouette, our color and texture were true contrasts. Black vs white, solid vs patterned. Yin and yang.

You can see our video from the performance at the benefit dinner below.

We at CatSynth spent the better portion of a recent afternoon at the Whitney Museum of American Art, taking in the entire museum top to bottom.  In the first of our reports, we start at the top with a survey of the work of artist Mary Corse.

The exhibition – Corse’s first solo survey at a major institution – focuses on her work in the mid-to-late 1960s as part of the West Coast Light and Space movement.  Like many of her contemporaries, Corse was very interested in the use of light as a medium in itself, but her output of light works was almost entirely focused on flat art, i.e., the kind you can hang on walls.  This made her a bit of an outlier in the movement.

At first glance, it might be tempting to dismiss her work as “another round of white-on-white paintings from the 1960s.”  But what makes it interesting is that light is at the center, rather than texture or pigment; and that she delved into emerging technologies and media to move beyond painting.

The most intriguing pieces in the exhibition were those that used plexiglass and lighting technologies.  Corse studied physics and engineering in preparation for this body of work.  We see this in her series where custom Plexiglass elements of different depths are juxtaposed next to one another allowing different amounts of light to pass through.

It is a subtle but fascinating set, and I found myself moving back and forth and looking from either side in my own exploration.

Corse also made her own light elements with a variety of technologies, including this piece from 1968 which employed an argon light and frequency generator, once again with her own custom plexiglass. I would have loved to have seen it in ion, but it was unfortunately broken at the time – Tesla coils are notoriously temperamental.  But they did have a video guide on hand with a video to let us experience the work.

Looking at the bands within the light, I immediately found myself thinking of the amplitudes in a time-varying sound wave, or perhaps a frequency-domain spectrum.   It would have been quite interesting to “hear” it.

The final set of work in the exhibition takes an abrupt turn, making the end of this period in Corse’s career.  In 1970, she moved from Los Angeles to Topanga Canyon and embarked on her Black Earth Series of paintings.

Beyond the obvious switch from white to black, there is a break from technology and a return to working with more traditional materials and textures.  The “black” in the Black Earth Series are ceramics made in her own kilns.  The glossy material is reflective, but also thick and covered in bumps and curves.  This is in stark contrast to the plexiglass surfaces of her earlier work and makes a fitting bookend for the survey.

Unfortunately, the exhibition is closing this weekend, but if you happen to be in New York I recommend checking it out.  It makes a fine escape from the overwhelm and sensory overload of holiday season. 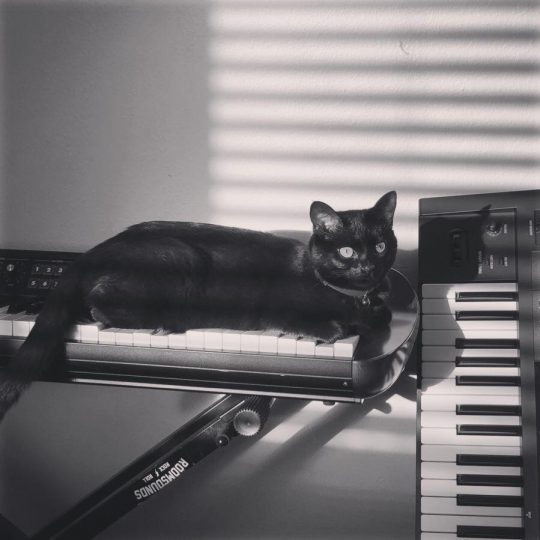 Beautiful black cat Luna strikes a “noir” pose atop one keyboard and next to another.  Submitted by Matthew Vasquez via our Facebook page.  I really like the way the stripes of light play against the keyboards, which in turn heighten the black cat’s figure.

This is Luna is not our Luna, but looks so much like her!  You can read our more recent tribute to the late great Luna of CatSynth here.

Identification of the synths/keyboards left as an exercise to the reader.

Tonight, I just have a photo of Luna to share. I am pretty sure the original was taken by my dad last July (i.e., 2005). I was just playing around and did some work with the contrast and lighting, and converted to black and white. I am quite pleased with the results. Quite the artsy urban kitty, don't you think?

It's been a nice evening. Quiet and clear, and warm – it usually doesn't stay this warm at night around here. A great night to go for a walk…and then come home, sit on the couch and manipulate digital photos.