Bill seems to be enjoying his new Juno-6 catsynth pillow. From vintagesynthesizermuseum via Instagram.

Bill on the boat, with his Juno 6. Thanks @catmanofwestoakland for the Juno catnip pillow.

I think Big Merp would love one of these, too 😺

If you can not already done so, please check out this video from our visit to the Vintage Synthesizer Museum. 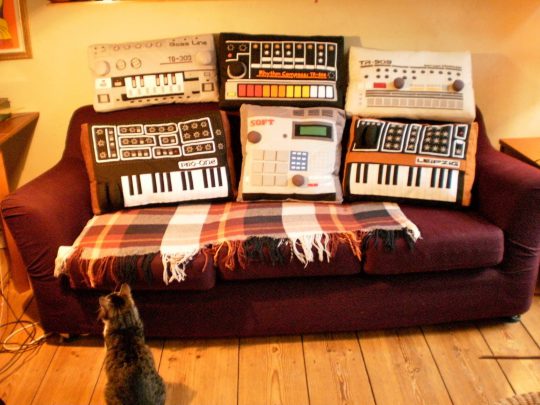 A cat contemplates a sofa full of synth pillows by softmachines.  We can only imagine what happens next 😸

Softmachines makes pillows and cushions based on classic electronic musical instruments.  For more, visit their shop.  These are so cute, we need one at HQ.

“i always love happy customer photos!
this cat is called moog and lives in Madrid.”

I usually focus on modern and contemporary art’s ability to give the mind space away from emotion and shift focus to the textures, shapes, colors and concepts of the pieces themselves. Options, Richard Bassett’s current solo show at Jack Fischer Gallery, however, does not give the viewer that luxury. One is forced to make a choice between ironic detachment or complete emotional engagement.

Bassett has made several series of handmade needlepoint pillows over the years for various shows. It is an object and medium more associated with craft than fine art, something that while visually pleasing is more likely to be sat upon than gazed upon. Bassett subverted the expectations of pillows in previous exhibitions, depicting violent crimes such as convenience-store robberies. The series featured in this show is of cats and dogs, images that are quite common on pillows (indeed, I suspect many readers may have cat or dog pillows at home). But these are not the happy, tender, images of animals we are used to seeing in domestic decor, but rather photographs of abandoned or abused animals at shelters.

In our culture, animals are bred for the purpose of serving human needs. Domesticated cats and dogs are dealt the difficult task of providing comfort and company, making them utterly vulnerable to human whim. This becomes especially clear when these animals end up in shelters.

Putting distressed animals or surveillance footage of crimes on pillows can seen as typically post-modern and ironic, and perhaps it ultimately is for the majority of people who view these pieces casually or critically. But for me, it is hard to look at the faces of the animals behind bars (especially the cats), and not feel a sense of empathy for them and thus a sense of pain and sadness. The images evoke feelings for the particular cats pictured, as well as for the plight of shelter animals in general.

Adding to the poignancy of this show is the fact that Richard Bassett passed away days before it opened in early February. This was a sad loss for his family and friends, as well as his admirers in the arts community. It is hard not to view the exhibition in this context as a memorial and a retrospective. Interspersed among the needlepoint pillows of “Options” were several works on paper under the simple title “Drawings”. Among these drawings were images of enlarged braille supposedly depicting gay porn from the 1950s. I have no means to declare the artists’ intent in either these braille drawings or in the needlepoint images animals. But I feel that he is posthumously challenging me to do exactly that.

The exhibition will be on display at Jack Fischer Gallery through March 9. I encourage readers who enjoy art, or love companion animals, or both, to see it.

Submitted by Endai Hüdl via our Facebook page.  The pillows are created by softmachines.  These are very cute.  Now I want one.

From Lee Tizzard (L.T.), via matrixsynth:

“My friend dug out his old 1978 Paia Strings N’ Things synth for me to check out.

He has replaced the tolex case with custom pine enclosure and has also modified the outputs
to have individual outs for the string and piano sounds.

Charlotte the Cat is concerned about the “String Thing”

And she has a few thoughts of her own about it.”

Note the Moog pillow in the background.

You can read more and see more photos in the original article.