Some cool beats with the Polyend Tracker. Cookie the cat seems to enjoy it.

The Polyend Tracker is a tabletop synthesizer and sequencer combo that reimagines the classic “trackers” from the 1990s. It has sampling, wavetable, granular and an FM radio built in.

This cat is quite engrossed in this performance featuring a KOMA Field Kit and Field Kit FX, and a vintage gramophone record player. We see a contact mic on the speaker feedback into the Field Kit, and more interesting things going on.

Some more images from this cat’s impromptu performance.

The subject line says it all. This little tabby is clearly owning the Kurzweil K2000S synthesizer. Submitted by Ron Gallagher via our Facebook page.

he K2000S uses V.A.S.T. (Variable Architecture Synthesis Technology) which allows you to take any multi-sample, noise or waveform and process it using just about any synthesis technique. The source of these multi-samples are from the 8MB of ROM which hold tons of authentic and superb quality samples. The internal processing is 32-bit with 18-bit DACs. The K2000 uses 31 sound-shaping algorithms to provide a variety of resonant filters, EQs, continuous panning, amplitude modulation, crossfade, distortion, digital wrap, waveshaper, pulse width modulation, high frequency enhancement, low frequency oscillators, hard sync oscillators and mixing oscillators, all with real-time MIDI control.

We have another round of “guess the synth” today with this adorable young gray tabby cat. Submitted by Colman Jones via our Facebook page.

If you have a guess on the synth, please leave it in the comments below.

This adorable tabby is proud of its Roland rhythm composer and TASCAM mixer. Submitted by Brandon M. Rogers via our Facebook page.

Adorable tabby cat resting next to a Waldorf Blofeld synthesizer.  From flohrdumal on Instagram. 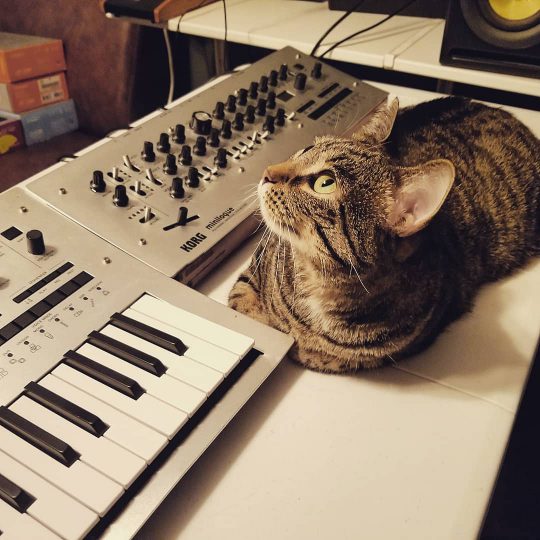 Cute tabby cat with two Korg Minilogue synthesizers.  It looks like one of them is the special “sawed off” model 😹

Photo from flohrdumal on Instagram.  This human and feline pair hail from Decatur, Georgia.

The theme if this week’s Photo Hunt is missed.  So for our combined Weekend Cat Blogging and Photo Hunt post, we present Morty:

As one can see, Morty was a rather smart cat, and like some other individuals we may know enjoyed his coffee and newspaper every morning, and kept his cell phone nearby.  Though it does appear that Morty enjoyed the department-store ads more than the news.

The cell phone definitely dates this picture, which I’m pretty sure was taken in early 2002. Seen in comparison to the current iPhone, it is definitely not missed. I still have that coffee mug, which I had originally gotten from a used store when I first moved to California several years earlier.

Morty was actually the first cat I lived with.  He was a rather impish character, always getting into mischief but also seemingly aware that his cuteness would prevent him from getting in trouble.  Even though he often drove me crazy, I still miss him once in a while. (As far as I know, he is still alive and well and still making mischief.)

Appropriately for a post featuring a tabby cat, Weekend Cat Blogging #310 is hosted by the “three tabby cats in Vienna”, Kashim, Othello and Salome.

Photo Hunt 265 is hosted by tnchick. This week’s theme is missed.

The Carnival of the Cats will be hosted this Sunday be Samantha, Clementine and Maverick.

From Deviant Synth, via matrixsynth:

Mommy the cat likes it, so…

Beautiful tabby cat, though. And it's Tuesday.