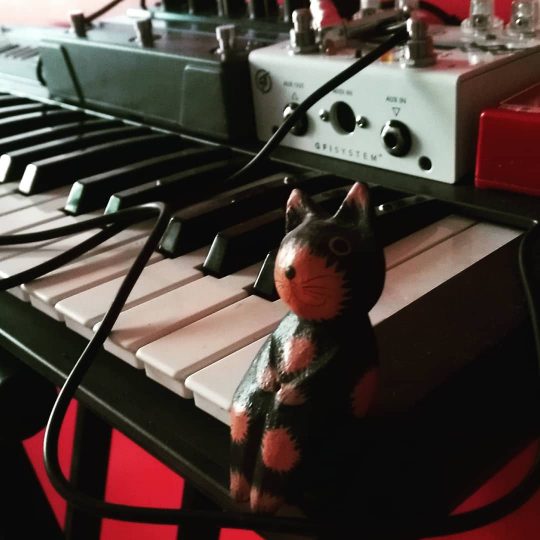 Little cat sitting on the corner of a Korg Poly-800 synthesizer.  Submitted by thedigitalpurrgatory (Anton Largoza-Maza) via Instagram. 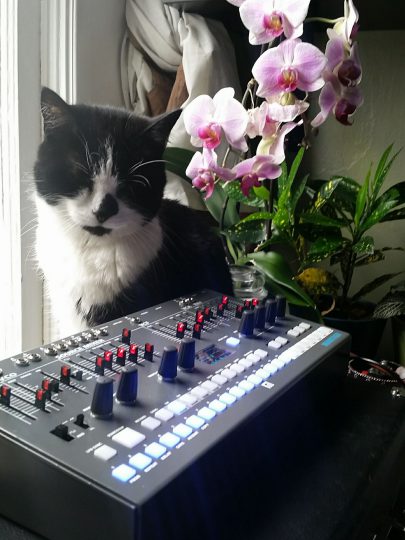 Carmen returns, this time with the new Malekko Manther tabletop synthesizer, courtesy of Julia More, aka The Synth Witch.  A bit on the manther from Malekko’s website:

MANTHER is a full featured, tabletop monosynth with an analog signal path, an advanced 64-step digital sequencer and onboard delay. The heart of this beast is a coveted CEM 3340 based VCO IC chip. The analog filter is based on an ssm2044 chip. The Source Mixer allows for total control over the Square, Triangle, Saw, Tri Shape, Noise and Sub levels and waveforms also include individual outputs. Dial everything from heavy basslines to screaming leads to stomping kicks. Manther growls like no other!

You can all of Carmen’s appearances on CatSynth via this link.  There is also a little of the Manther in this video from NAMM.

Purim is the “most synthesizer-y” of Jewish holidays, given that one of it’s central rituals is noisemaking. This year we created a synthesizer demo running sounds from a gragger through several modules.

The demo uses a mixture of pre-recorded gragger on the QuBit Nebulae and live sound via the Mikrophonie and Make Noise Echophon. The full list of modules used in the Purim demo is:

I do wish I already had a Qu-bit Nebulae v2 for this project.  You can see our review of v2 from NAMM 2018 here.

Purim is a holiday that commemorates the saving of the Jewish people in the ancient Persian Empire from the king’s wicked advisor Haman, as told in the book of Esther. Traditionally, the gragger is used to mask the name of Haman when said out loud during readings. 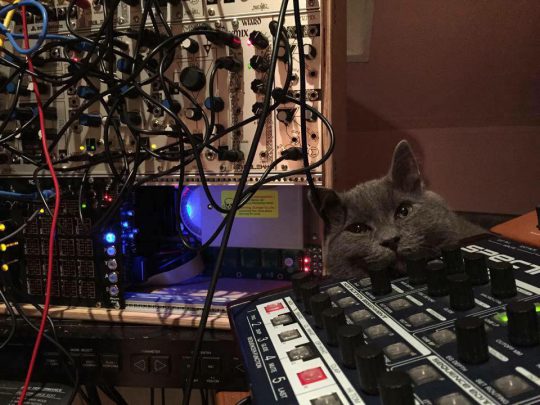 Handsome cat sneaking up on a Radikal Technologies Spectralis synthesizer (1st gen).  There are some Eurorack modules including the familiar old-style Wiard modules from Malekko Heavy Industry.

Winter Modular Eloquencer is the main sequencer with all 8 tracks used for: bass from Verbos Harmonic Osc, 4 drums from 2 Erica Pico Drums.
The chords are formed by Intellijel Shapeshifter, Mutable Instruments Elements and Braids, through Makenoise Erbe-Verb and Erica Black Hole DSP.
The lead and blips are from Tiptop Z3000 and Malekko Anti-Oscillator, triggered by the Varigate 8+.
Other modules, vcas, mixers etc: MI Veils, Doepfer A-132-2, A-143-2, A-134-1, A-138b, A-138p/o, Waldorf KB37, Low-Gain Submix7, Makenoise Maths and Optomix.

That cat is too adorable 😻

Fast, reflect, and question. These are our personal mandates on Yom Kippur this 5778 (2017). Fasting is pretty self-explanatory – I don’t do it every year, but this year it feels important to do so. Sam Sam does not have to fast. The questioning centers around “what does it mean to be Jewish in this time and place”, an especially complicated and treacherous question for those of us who are secular Jews. Yom Kippur is described in Leviticus, the one book of the Torah that I have not been able to get through in its entirety (mostly because it’s extremely dense and about as riveting as the phone book). But I still celebrate independent of that, based on heritage and family tradition. You are a Jew if your mother is a Jew, end of story. I extend this rule to my cats.

[Sam Sam is exempt from fasting]

For an excellent read on the topic of secular Jews on Yom Kippur, especially secular Jews committed to activism and social justice, please read this article by Dania Rajendra [Full disclosure: Dania is my sister-in-law.]. For me, part of my plan for this holiday was to compose a track based on sounds from a short-wave-radio synth module an, idea I formulated during a reflective moment last night.

The track was recorded as a meditation of sorts, getting into a heightened, focused state while turning the knobs of the Eowave short-wave module, tuning into stations that aren’t there. The other “master” of the track was the Wiard/Richter Noisering, which I let control the Rossum Electro-Music Morpheus module. Both focus on chance and working with elements very much outside my control. I also did not want to spend much time outside the meditation-recording process itself. There is no editing save for some tapering at the beginning and end of the track and the obligatory EQ and compression.

I am both doing too much, and too little at the same time. I can’t save all the shelter cats; I can help everyone suffering through one disaster after another in North America and Carribean. But I can try to make a little bit of a difference in each. When I focus on all things “CatSynth”, sometimes my music suffers – I’m overdue booking new gigs for my band CDP and I do feel a need to atone for that. In short, the challenge in 5778 and beyond is to find a way of doing all the things that matter most while minimizing time and resources on the things that don’t. No easy task for someone who tends to say “yes” to everything, hates to disappoint others, and has a difficult time letting go of things. But that last one is another aspect of this holiday, and so it is as good a time to begin as any…

Two weeks ago I participated in a two-day opening with visual artist Yong Han and performance artist Jacqueline Loundsbury Live Worms Gallery in San Francisco. Together, we created an experience combining sculpture and two-dimensional artwork with music and performance art.

There are elements that are common in his work across media, including graceful geometric curves and lines with organic shapes and patterns seamlessly integrated. Indeed, some of the two-dimensional works appear to the shadows of his sculptures.

What particularly works for me in these pieces, whether two dimensional or three dimensional, is their simplicity. The lines and curves form repeating patterns and leave empty spaces; and the areas of color are simple and well-deliniated as well. Many of the pieces have a very delicate feel to them, but some of the more recent ones are very densely packed and suggest strength.

The basic structural theme of thin metal and curving lines carried over from the visual art to the performance aspects of the event, providing a level of continuity between the two. The first night featured Jacqueline Loundsbury in an improvised performance piece called re:BOUND where she wrapped her body in steel wire bindings. Large rolls of steel wire were placed around the performance space where she stood and visitors were encouraged to participate by taking pieces of wire and wrapping them around her bare body. Throughout this performance, she was quite exposed and accepted the risks of not knowing what participants might do – something taken to much more dangerous extreme by some of the early performance artists in the 1970s. Indeed, the resulting “wrapping” was less of a cocoon and more an overwhelming array of adornments, such as headgear and other decorative elements, some sexually charged. And the whole amalgamation of wire seemed quite heavy and uncomfortable. But she successfully completed the performance and the resulting embodied artwork fit well with the existing sculptural pieces. After extricating herself from the wire, some of the pieces themselves became independent elements (along with the unused wire) for the presentation on the next day.

The second evening featured my live improvised electronic music in the space with the artwork and a video projection of Loundsbury’s performance from the previous night. For the set, I used several iPad apps including Animoog, Bebot and iMS-20, along with the Dave Smith Evolver and a couple of newly acquired analog synthesizer modules, the Wiard Anti-Oscillator from Malekko Heavy Industry and the E350 Morphing Terrarium from Synthesis Technology. Overall, I intended the sounds to reflect the wire theme that was present in the sculptures, drawings and the performance, with sounds that were metallic, continuously curving, or otherwise reflecting of the other elements. You can see a short clip below of the video projection and the music-gear setup in action.

re: BOUND, with Yong Han, Jacqueline Loundsbury and Amar Chaudhary from CatSynth on Vimeo.

The improved music continued for the whole evening, about four hours in all, with breaks for selections from my CD Aquatic.

A decent number of people came through the show over the duration, a combination of people who knew advance from announcements as well as some who wandered in from the surrounding North Beach neighborhood and enjoyed the experience. I am glad I was able to participate, and look forward to working with both artists again in the future.

This year, Malekko Heavy Industry had their own booth at NAMM. It was actually a bit of a challenge to find, all the way in the back of Hall C past the endless walls of guitars and celebrity-induced traffic jams. But I did find them, and was treated to a tour of a Malekko-only modular system:

In the above image (which admittedly isn’t the best quality), we see a simple patch that was focused on the Wiard Anti-Oscillator and Borg Filter, both of which I was particularly interested in. The Noisering was quite interesting as well and offered a lot of possibilities. The Wiard Jag (Joystic Axis Generator) was very pretty and intriguing, but I couldn’t immediately envision it’s use in a musical performance the way I could with the Noisering.

The system being shown is quite complete, with a host of VCOs, filters, modulators and utility elements. Indeed, one could build something just from their modules alone. But I do think it is most creative to mix and match with our manufacturers.

“Beautiful photo of a nearly full Monorocket Lexington by Monsturo. Nice selection of modules from a variety of manufacturers. Lots of oscillators, multiple filters and several sequencers for control. The Harvestman Stilton Adaptor is used for integrating external effects. LINK: www.myspace.com/monsturo.”

I have tagged some of modules I recognize (e.g., from NAMM).  Click on the tags for other pictures, info and articles.